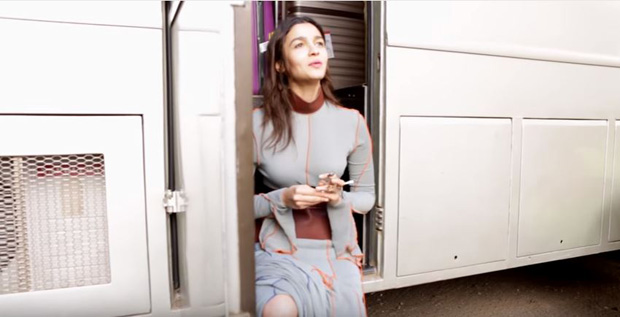 Alia Bhatt loves to play different shades of characters on screen. From light hearted characters to dark ones, the actress has done it all at a very young age. One thing people also admire about the gen-next star is that she is a very straight forward person.

Recently, in a candid conversation, Alia Bhatt admitted something that was unexpected. She was featured on the cover Grazia India’s special issue celebrating their 9th anniversary. While she looked sensuous, behind the scenes she was very candid and made quite interesting revelations about herself.

When quizzed about the curse words she uses a lot, Alia admitted that she uses the fu*k a lot. Then, a chuckling Alia said, “Sometimes, I can go into like MC/BC also. I am quite Indian in my roots that way.”

Alia admitted that she ain’t a stalker on Instagram but top 7 people one should follow on Instagram should include Gigi Hadid, Sonam Kapoor, Mallika Dua, Jacqueline Fernandez, Jitesh Pillai, Karan Johar and Rakhi Sawant. Rakhi Sawant is in the list because she finds her too entertaining. She also said that she hates two hashtags- #AboutLastNight and #MyMain. The reason being, “This half talking I don’t understand.”

On the work front, Alia Bhatt will be seen in Zoya Akhtar’s Gully Boy and Ayaan Mukerji’s Dragon.