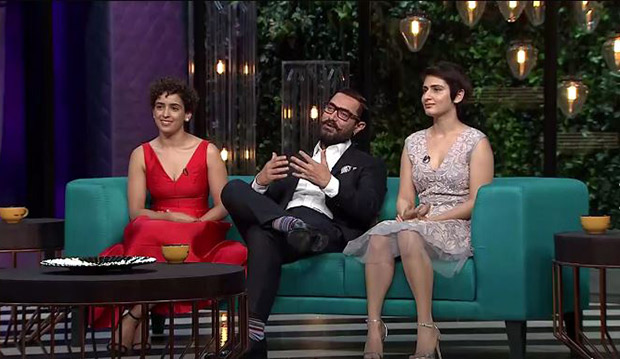 After the Koffee century episode, time has come for another Khan to grace the coffee couch. Aamir Khan is all set to make his appearance with his Dangal daughters Fatima Sana Shaikh and Sanya Malhotra. While the girls are making their debut on the show, Aamir Khan is making his second appearance on the show. Last season, he had come along with his wife Kiran Rao.

While the episode is a week away, the promo for the upcoming episode is out and it seems like a fun filled episode. Aamir Khan and the girls are already comfortable with each other as Aamir gets uncensored, witty and sassy. He admits being emotional all the time and tearing up after watching the trailer of his upcoming film Dangal. Karan finds this amusing because Aamir has been in the industry for the longest time, and him tearing up watching his own movie trailer is funny and weird.

Karan Johar then bombards Aamir Khan with a question like, "If a girl wanted to get really close to you, what would she need to do to win your heart?" To this, a cheeky Aamir replies, "Just get close to me. I'll do the rest." The girls sitting next to him chuckle and are surprised to see their mentor's different side as well.

It seems like this episode will be full of fire and spice when it airs on Sunday.