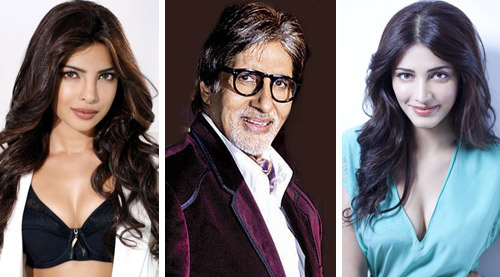 Surprising things are happening in Hindi cinema: for the first time, actors who are also singers are not just singing for themselves but for others!


Priyanka Chopra has recently sung a duet with actor-singer Farhan Akhtar-the title-song of his production Dil Dhadakne Do with music by Shankar-Ehsaan-Loy. Yes, she will enact the song on screen too, but what has given Priyanka special pleasure is that part of the song will also feature Anushka Sharma, and her vocals will also go on her.


Years ago, when asked whether she would like a parallel career as a playback singer, Priyanka had replied, "Why not? I would love to sing for top actresses!" This was when she had sung a line in the famous 'Right Here Right Now' in Bluffmaster! for herself a decade ago. Since then, of course, PC (as she is called) has opened up a new musical career by featuring in an international album, whose singles have been released before the entire soundtrack. She also brilliantly rendered the full-of-maternal-emotions 'Chauro' in her film Mary Kom.


Priyanka Chopra's musical inclinations are rooted in her late father who was a seasoned singer. On the other hand, actor-singer-filmmaker Kamal Haasan's daughter Shruti Haasan, who is a trained Hindustani classical singer, and has further studied music in New York, is a natural singer, who also has a rock band. As a kid, she had sung a song in her father's Hey! Ram 15 years ago (the background title-song with her father in both the Tamil and Hindi versions), and she had also sung for herself in Luck, but in 2015 she has already emerged as a playback singer in two tracks - 'Joganiya' for Sonakshi Sinha (technically junior to her) in Tevar and 'Sannata' for debutant sister Akshara Haasan in Shamitabh.


Sajid-Wajid have done something interesting indeed: they have Mamta Sharma lip-synching 'Madamiya' for Shruti in a cameo in the same Tevar even as she sang playback for another artiste. This is a first in Hindi cinema.


Another first for Hindi cinema is Ilaiyaraaja's Shamitabh, in which Amitabh Bachchan sings 'Piddly' partly for himself but mainly for Dhanush! This is as per the story demands that the mega-star not only speaks but also sings for Dhanush.


A reverse case, wherein two actor-singers sang for one artiste on screen was the retro medley, 'Go Meera Go' sung by both Amitabh and his son Abhishek Bachchan in Vishal-Shekhar's Bbuddah Hoga Terra Baap (2011) but lip-synched by only the senior Bachchan on screen. This was a first also because it was a father-son duet and had the son singing for a father.


In the past, we have had more such examples: Arun Bakshi, himself an actor, sang for several heroes, notably Sanjay Dutt in Amaanat ('Yeh Duniya Kya Chahe Money Money'), Suniel Shetty in Gopi Kishen ('Mera Mehboob Aayega'), Akshay Kumar and Arjun Rampal in Aankhen ('Phatela Jeb'), Raza Murad in Prem Yog ('Lokan Akhiyan') and more since the '90s. The composers ranged from Bappi Lahiri and Anand-Milind to Aadesh Shrivastava.


Though this phenomenon was not common, there have been standout examples in the pre-'90s as well: Danny Denzongpa made his singing debut with the popular Lata Mangeshkar duet 'Mera Naam Aao' from S.D. Burman's 1973 Yeh Gulistan Hamara, before getting to sing a few songs for himself. This song was for legendary comic Johnny Walker.


Usha Khanna had Shatrughan Sinha and Sulakshana Pandit (the latter a playback singer who oftener than not had Lata and Asha singing for her when she was a leading lady!) singing for Prem Krishen and Tamanna in the Rajshri film Alibaba Marjina in the '70s, 'Haaye Haaye Haaye Maar Daala', while Leena Chandavarkar (after she quit acting) sang an antakshari with husband Kishore Kumar in the 1985 Lover Boy, with Meenakshi Seshadri enacting her portion, while the music was by Bappi Lahiri!


And finally, Mehmood sang for villain Goga Kapoor dressed as a lion in a children's play in the song 'Prem Se Humko Jeene Do' with Lata Mangeshkar. The music was by Rajesh Roshan, who had got his first break as a composer with the comedian's production Kunwara Baap six years earlier!


Of course, Kishore Kumar, Talat Mahmood, Shailendra Singh and Salma Agha were as much singers as actors, but let us not forget that Kishore barely sang for anyone other than Dev Anand and himself through the '50s and '60s, while the other three did not work much in their capacity as actors.


Yes, anything is possible in the strange world of cinema.