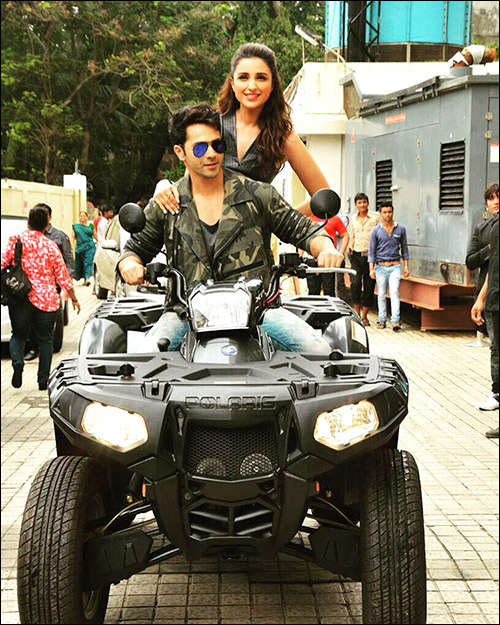 With the film Dishoom's release just around the corner, its stars are going all out to promote the film. While the film's stars promoted the film on reality shows and also through the 'Dishoom' challenges, its lead heroine Jacqueline Fernandez even flaunted her customised 'Dishoom' ring.

Even though Parineeti Chopra makes a guest appearance in the film only in a song 'Jaaneman Aah', she too is sparing no efforts to promote the film. Recently, during the press meet of the film, Varun Dhawan not just entered the venue in his ATV (All Terrain Vehicle), but also drove Parineeti Chopra around the city in the cool looking vehicle.

Parineeti Chopra even posted a supercool photograph of Varun Dhawan and her in the ATV, with a caption that stated, "My mad jaaneman@varundvn who took me across Bombay on an ATV!! MOST FUN I HAVE HAD!! Hahah song out now :)"

Dishoom stars John Abraham, Varun Dhawan, Jacqueline Fernandez, Nargis Fakhri and Saqib Saleem in lead roles. Directed by Rohit Dhawan, Dishoom is being produced by Sajid Nadiadwala and is slated to release on July 29 this year.