Urvashi Rautela has many projects lined up back-to-back with a very busy routine overall. The actress has now posted on her social media that they have begun shooting the third schedule of their upcoming web series Inspector Avinash, in which she will star alongside actor Randeep Hooda. The crime-thriller show is directed by Neeraj Pathak of Sunny Deol-starrer Bhaiaji Superhit fame and is produced by Jio Studios. Additionally, Urvashi Rautela has signed a three-project deal with Jio studios. The web series Inspector Avinash is a biopic based on the super-cop, Avinash Mishra and Poonam Mishra. 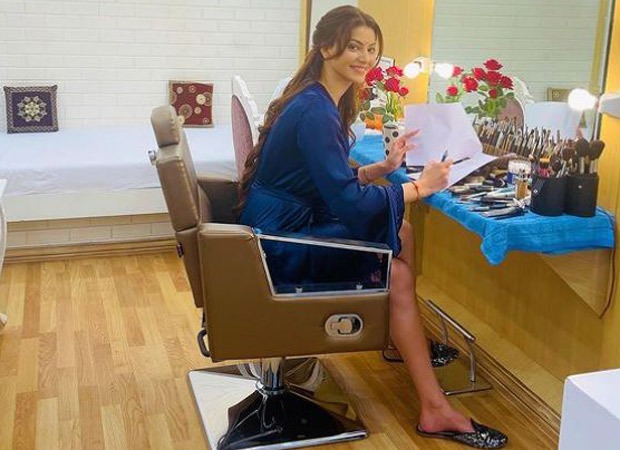 Recently, Urvashi Rautela shared a sneak peek of her vanity van and posted a bunch of photos on her Instagram which show her sitting right before her shoot, studying her character and going through scripts for the web series, 'Inspector Avinash'. The actress is dressed in a blue robe with her makeup and hair done, and her forehead is adorned with a bindi as the role requires. She captioned the photo saying, "4:30 am ???? on sets of #InspectorAvinash Shoot resumes ???? That's what makes it so attractive. You get to break all your own rules. The more conflict I find, the more interesting the performance. #vanityvan #trailerdiaries". On "Inspector Avinash", Urvashi Rautela will play the character of 'Poonam Mishra'. The web series revolves around a real-life super-cop. The masses are thrilled and excited to see such a couple on camera and certainly can't wait for the series to release.

On the work front, Urvashi Rautela will be making her Tamil debut with a big-budget sci-fi Tamil film in which she will be playing the role of a microbiologist and an IITian, and later she is going to appear in a bilingual thriller Black Rose along with the Hindi remake of Thirutu Payale 2. The actress recently got a blockbuster response for her song Doob Gaye opposite Guru Randhawa and Versace Baby opposite Mohamed Ramadan. Urvashi Rautela is currently training for an upcoming action film, which will be revealed soon.