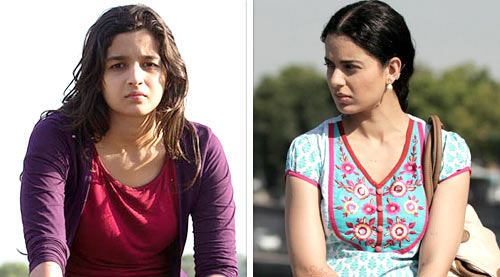 Kangna Ranaut in Queen or Alia Bhatt in Highway? Shahid Kapoor in Haider or Aamir Khan in PK? These are the names being spotlighted at that time of the year, when the awards are given out, draws close.


The awards season is around the corner. The buzz is that Shahid Kapoor, Kangna Ranaut and Sajid Nadiadwala would walk away with all the awards this year.


An A-lister filmmaker and member of a popular awards jury spoke on condition of anonymity saying, "We haven't started the evaluation of the year's potential awards. But it's going to be pretty much a cakewalk for Shahid Kapoor in Haider and Aamir Khan in PK. We haven't seen PK. But we're pretty sure Aamir would be right up there."


However since Aamir doesn't attend popular awards function chances are he would be given the snub by many of the award functions.


A director who worked with Aamir in one of his most important films recently says, "The award functions have become nothing more than televised events. And since Aamir doesn't attend award functions, he may not be given the award. I am of course assuming that his performance in PK would be awards-worthy."


There is unanimous opinion that this year's best-actress words would go to either Kangna Ranaut or Alia Bhatt.


Says the jury member, "Alia was outstanding in Highway. However the general opinion among critics is that she will have plenty of other opportunities to blossom on screen. Kangna, for better or worse, has landed herself the role of a lifetime in Queen. She will win all the best actress trophies."


Priyanka Chopra's rousing Mary Kom act seems to have fizzled out at the end of the year. It doesn't seem to be a popular choice for best actress largely because, in the words of a leading filmmaker, "She didn't connect with the audience the way Farhan Akhtar's Milkha Singh did. Priyanka will get a nomination. But she won't win."


As for the best film there is no unanimity, as no film in 2014 has grabbed instant attention. However a jury member from the popular awards thinks Sajid Nadiadwala is a strong contender for best directorial debut.


Says the erudite filmmaker, "There are as many as 21-22 debutant directors in 2014. But none as successful as Sajid Nadiadwala. With Kick, he proved he was as conversant with the rudiments of direction as any of the seasoned directors."