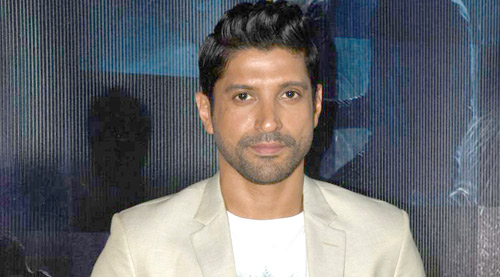 1. Dil Dhadakne Do (DDD) is Farhan's third film directed by his sister Zoya. In Zoya's Luck By Chance, Farhan played a ruthlessly ambitious wannabe star, apparently modeled on a well-known superstar of Bollywood. In DDD he does just a guest appearance.

2. In DDD, Farhan Akhtar is paired with Priyanka Chopra for the first time. He shares his first screen-kiss with Ms Chopra. Both singers by choice they belted out the title song. The song plays at the end-credits without the accompanying video.

3. Though Farhan had decided never to give voice to any actor except himself, in DDD his voice in the title track for the video is shared with Ranveer Singh and Anil Kapoorâ€¦ a concession for his dear sister that won't be made under any other circumstance.

4. Farhan and Zoya are so close, friends say they could be twins. They are the only successful filmmaking brother-sister duo in Indian cinema, their only parallel being Hollywood's siblings Garry(Pretty Woman) Marshall and Penny(Awakenings) Marshall.

5. Unlike Farhan, Zoya never had any ambitions of being an actor or singer. Filmmaking is all she ever wanted to do.

6. The only filmmaker-actor-singer in the Indian entertainment industry, Farhan divides his time among his three vocations with equal fervor. He doesn't know which of his vocations he loves the most. To put it in a nutshell, Farhan suffers from the opposite of a multiple personality disorder.

7. Farhan's directorial debut Dil Chahta Hai was based on his own experiences with his life-long buddies. Farhan believes in life-long commitments.

8. After his directorial debut, Farhan next directed the pro-army film Lakshya in which Hrithik Roshan portrayed a wastrel who discovers a sense of direction in his life by joining the army. It was hoped that Lakshya would do for army recruitment what Farhan's sister Zoya's film Zindagi Na Milegi Dobara did for tourism in Spain. Lakshya flopped.

9. It was always Farhan's ambition to eventually become an actor. It took 7 years after his directorial debut for Farhan to make his debut as a singer and actor in Rock On.

10. Farhan's career as director has at present taken a backseat to his career as an actor and singer. He is unlikely to make Don 3 in the near future, although his DDD co-star Priyanka Chopra is very keen that he start Part 3 right way. For those who came in late the 'Don' series stars Shah Rukh Khan.