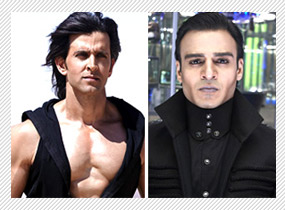 It's a man-to-man, hand-to-hand, heart-in-the-mouth combat between Hrithik Roshan and Vivek Oberoi in Krrish 3. And we hear the climactic fight lasts for a good 15 minutes on screen.


Says a well-informed source, "It was to last a lot longer. But it had to be cut as the film is already 2 hours 30 minutes long.But the real challenge was how to make this one-to-one climactic combat different from the one in all the other films after Dabangg that have shown the hero and the villain slug it out."


Interestingly, all the action sequences of the film were edited as they were being shot.


Confirming this Krissh 3's editor Chandan Arora says, "That's right. We edited the action scenes on the sets as we shot them. Mr Rakesh Roshan insisted on doing so because the international Chinese action-director Tony Chin had given us limited time. He had to leave to supervise the stunts in another project.So if we got the action sequences went wrong, we'd have had no means to revise them in Tony's absence."


Chandan says he enjoyed this new method of editing. "It was a new way of working for me. And I have to admit I was hesitant initially. But Mr. Rakesh Roshaninsisted. I had edited all the songs of Rakeshji's Koi...Mil Gaya. So I knew he would be fully convinced before doing anything."


The most problematic action sequence was the climax where Hrithik and Vivekwhere to slam it out. Says Chandan, "We had to complete the editing of the climax in record time and ensure it was unique and riveting.I think we managed to make the action scenes look world-class."