Last Updated 02.12.2022 | 11:35 PM IST
feedback language
follow us on
Bollywood Hungama » News » Bollywood Features News » Tapsee Pannu did the stunning stunt in Baby all by herself 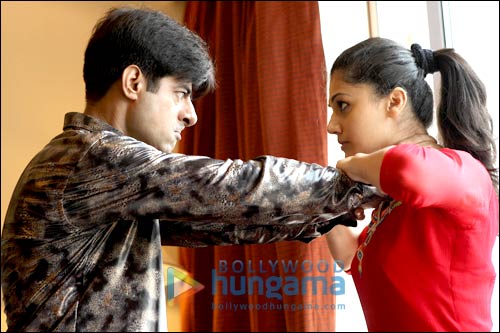 Her 20-minute role in Baby as Akshay Kumar's accomplice in Nepal, who beats the hell out of Sushant Singh, has gotten her the kind of attention that even her debut film Chashme Buddoor didn't.

"Most people have loved the film. Even those who haven't liked the film that much have been extremely responsive to my performance," says Tapsee happily.

Tapsee Pannu did the stunning stunt in Baby all by herself

Playing an undercover agent on a dangerous mission, Tapsee had to pull out all the stops in her hand-to-hand combat with Sushant Singh.

"I did the entire lengthy fight on my own without a body-double," Tapsee declares proudly. "And it has taken a toll on me. My old leg joint injury has re-surfaced. But that happened later. During the fight I was thrown around all over the room. There were times when one or the other of my limb wouldn't move. I had to take painkillers and go ahead with the stunt."

The end-result is worth it. Tapsee's action sequence is arguably the most authentic stunt scene ever filmed on a Bollywood female actor.

She gives credit to her action director and co-star for the sequence. "We had two gentlemen on board to train. My co-star Akshay Kumar was such a big help. Being a disciple of martial arts himself he guided me through the sequence. Of course, the fact that I've always been the sporty outdoor types helped me to get the scene right."

Tapsee says she has been lucky with her colleagues and co-stars. "Whether it was the Baby director and hero Neeraj Pandey Sir and Akshay Kumar Sir, or my director Amit Roy and co-star Amit Sadh in my new film Running Shaadi.com, they have been my best promoters. They've always said good things about me."

Tapsee admits she is not good at social networking. "I am still an outsider in Bollywood. I don't go to parties because I don't know anyone there and I can't strike up a conversation with strangers. I have my friends outside the film industry. And yes, I do feel that as an outsider I can't afford to make one wrong move. Because unlike star-kids, I won't get a second chance. I've no dads, sugar-dads or uncles in this film industry."

She hangs around a lot with her Running Shaadi.com director and actor. "Amit Sadh, Amit Roy and I do go out a lot. I specially go on a lot of dinners, etc with Amit Roy... That's because we really bonded during the making of the film."

Running Shaadi.com would have released before Baby. "But the producers of the two films are the same (Crouching Tiger). They decided to release Running Shaadi.com after Baby so that the audience's appetite would be whetted after seeing me kick some dust in a brief role in Baby. In the film, the audiences will get to see another side of my personality."

The chirpy vivacious Tapsee Pannu is all set to undergo another change of image in Shoojit Sircar's Agra Ka Dabra. "Contrary to the kickass image in Chashme Buddoor and Baby I play an extremely demure soft spoken simti si sehmi si nazaaqat se bhari Muslim girl in Agra Ka Dabra. My co-star Ayushmann Khurrana is already saying good things about me. I guess I am lucky."