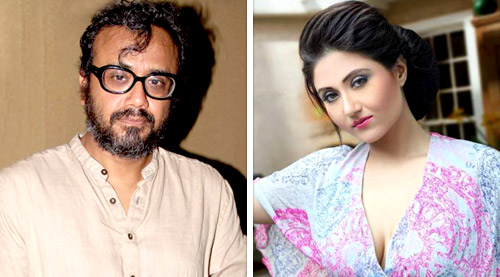 Swastika Mukherjee who has spent a good 10 years playing the lead in Bengali films is thrilled with her Hindi debut in Dibakar Bannerjee's Detective Byomkesh Bakshy.

"As a maiden appearance I must say I have a very interesting role. It isn't the conventional lead. Yet it has made quite an impression on the audiences." Swastika is dazzled with the attention especially since she is seen as quite a mysterious and provocative femme fatale in real life too.
Laughing she says, "The image apart, my role of Anguri Devi was quite a tightrope walk for me. I could neither go over-the-top nor underplay it. It had to be just correct. My brief, that I got from my director Dibakar Bannerjee was so clear, it was like getting an entire life history of my character. Dibakar built an entire screenplay of Anguri Devi's life from before the time she appears on screen. We could make an entire film out of it. In fact, when I heard the story of Anguri Devi from Dibakar I jumped thinking the film was based on my character. Dibakar had to calm me down saying Anguri's back-story was just for the story board. But what a story! It put Anguri Devi's character for me in an entirely different perspective. Dibakar also gave me to read books on the seduction of younger men by older woman."

Swastika likes the thought of being trusted to play such a complex character. "Unless an actor is trusted to deliver she cannot rise above herself. Dibakar gave me a chance to recognize my own potential."

A lot of time went into finding the right look for Anguri. "Looking like Anguri every day before the shoot, getting the curls and the lipstick and the character's clothes and accessories right wasn't easy. A seductress in the 1940s cannot be compared with a woman of today, no matter how tempting it is to draw parallels," says Swastika trashing all attempts to compare her to her character.

Playing the seductress in Detective Byomkesh Bakshy wasn't easy for Swastika. "My character didn't have to make an effort to seduce Sushant. The art of seduction is part of her DNA. As we all know film actresses have a real and reel life. But Anguri is never PLAYING the seductress. She is a natural-born seductress."

Swastika has spoken her own Hindi lines in Detective Byomkesh Bakshy. It wasn't easy. "I mix up the gender, as all Bengalis would do. While delivering my lines I'd suddenly see Sushant grinning in front of me. I was like, what's wrong? He said, 'You've just turned me into a girl.' I focused hard on getting my dialogues right before we started shooting. Once we began shooting I was fine."

Swastika is all praise for Sushant. "He is also pretty new to acting. Doing an iconic character like Byomkesh wasn't easy for him.We were united in our constant effort to understand our characters."

Swastika hasn't planned her future in Bollywood. "I am not much of a planner. I was working in Bengal for 12 years before my first Hindi film. I've tried every kind of role in Bengali. I don't think heroines in Bengal take on as many unconventional roles as I have. I waited for Byomkesh to be released for people to see what I'm capable of. It'd be great if I can do varied roles in any language, just as I have done in Bengali. I am not too keen on tagging my non-Bengali career as 'Bollywood' or anything. It could be any language. But the role has to be out of my comfort zone. It would be great to work with new actors on a new language. I enjoy the feeling of unpredictability."