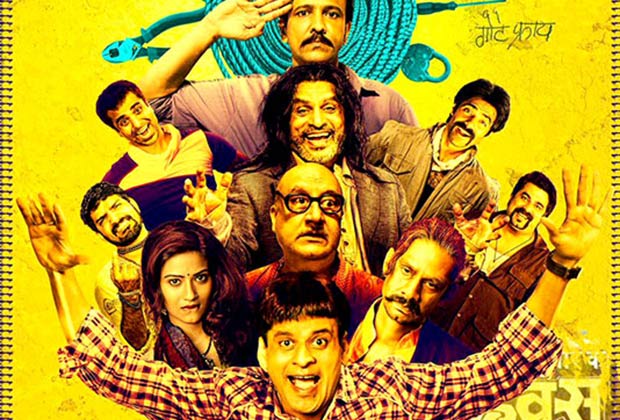 Before things fall apart in this saga of the chaos that is the aspirational North Indian middleclass which wants it all (and that includes the latest version of the I Phone) and they want it fast, the goings-on are great fun in squirmy discomforting kind of way.

Debutant director Sanjeev Sharma captures with joy and relish, the chaos of the acquisitive class in the narrow ancient gullis of Old Delhi where criminal aspirations fester. Sharma and his co-writer Sandeep Saket takes charge of this scrambled world of dirty doings and murky dealings with a relish that borders on nirvanic joy. He enters the lives of his characters noisily and leaves them at the end looking hopelessly compromised and inescapably trapped in their milieu.

Not that we feel sorry for these people with their squalid lives.

How do I describe the anxious yet risible chaos of Saat Uchhakkey? Let’s say, if Kanu Roy’s Titli was a fun film instead of a road-rage version of a dysfunctional family, this is what we would get. A film that never forsakes its appetite for gusto even when the characters cross all limits of decorum and even plain decency.

These are despicably lowdown people, so inured in self-interest that they can’t see below their noses, or beyond their ever-restless libido. In this lusciously lewd environment women are not just objectified they are happy to be treated as sex objects as long as their lifestyle doesn’t betray their slut mentality.

So we have Sona (Aditi Sharma doing a lips making hip-swaying go-getter),the film’s only female protagonist who threatens to stuff a lauki up a vegetable seller’s orifice and then walks away with it.

There is nothing low-key about this lauki wali ladki.

Then we have Sona flirting to the point of near-fornication with a smitten cop Tejpal (K K Menon, devastatingly brilliant) while going steady with the film’s principal protagonist Pappi (Manoj Bajpai). And Sona’s mother (Lushan Dubey) talks to both her daughter’s admirers with her pallu falling off her shoulder.

Accidently I am sure. 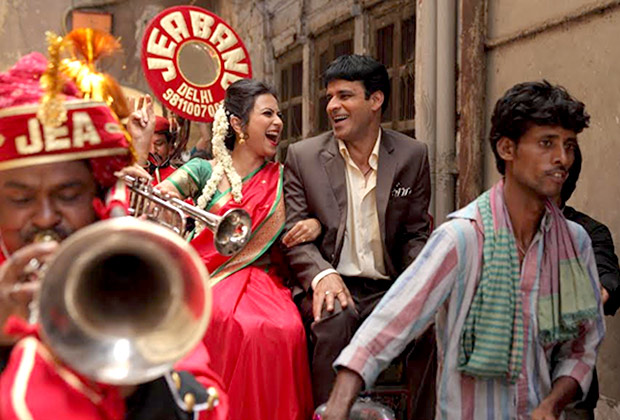 To his advantage the director gets a dream cast to play out the nightmare scenario. The greed and the grab-mentality are so vividly mapped on these sweaty sun-scorched slyly self-serving acrimonious yet defiant faces; you feel you’ve entered a lot more than just their homes. Every actor is so into the milieu, it’s like watching porn-poverty without the comfort of an orgasm.
Manoj Bajpai and K K Menon as adversaries of the law and in lust, pitch marvellously reined-in performances into a plot that dares them to go over-the-top. They wisely refrain from biting the bait. Their close encounters of the hurt kind are priceless.

“Whenever I see him my ears stand alert,” KK tells Sona about Pappi.

“And when he sees you?” Pappi asks Sona.

It must be hard. To be so desperate.

The other actors Aparshakti Khurrana, Jatin Sarna, Vipul Vig, Nitin Bhasin and the redoubtable Vijay Raaz as Bajpai’s accomplices in an outrageous heist plan (akin to what the young teenagers attempted in the recent horror film Don’t Breathe with far more sinister results), these are players who know the game from the inside and can unlock the doors leading to the crime world’s underbelly without a care for the ramifications.

Every character minor or major had me intrigued. Who is the drunken lout who specializes in tearing women’s blouses in false court cases? Or the vegetable vendor who leers at Sona? Or the guy who cycles for ten days uninterrupted (is he an avatar of Manoj Kumar in Shor?). Or the guy selling the lottery tickets whom Manoj Bajpai hugs and kisses after winning? Or the old Muslim who swears obscenities at the man who has usurped her of his property? The man (Anupam Kher) is stuck in the 1990s and threatens to call Rajiv Gandhi for help.

The only character and the performance that fails to work was Anu Kapoor as some kind of a transcendental prophet on the prowl. Kapoor’s clairvoyant act becomes repetitive and distracting after a point. Kapoor’s character falls apart in the climax where the hoodlums (or uchhakes, if you prefer) enter a demented Zamindaar (Anupam Kher, pricelessly demented)’s haveli in search of gold.

But this is much later. By then there is so much of the backwater bacchanalia to take away. And that includes a deliciously subverted version of classic S D Burman-Asha Bhosle mujra Nazar laagi raaja torey bangley par (from the film Kala Pani) that plays on as our pavement heroes break into a bungalow where danger doesn’t lurk.It smirks.

Saat Uchhakkey with its profusion of profanities and an abundance of audacity hits all the right notes for most of its playing time. Cinematographer John Jacob Payapalli shoots Old Delhi with a keen eye for decadence and debauchery in conflict with a world of techno-driven instant gratification that has seeped into the crumbling walls of havelis that have seen better times.

And are determined to see some more. This is an original and often engaging drama of the damned who refuse to be doomed.