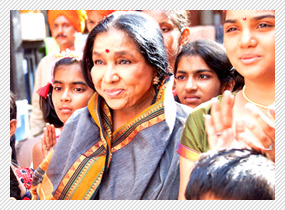 The Mother is a figure that instantly evokes tender thoughts in each of us. Getting singing diva Asha Bhosle to play the mother in Mai was a master-stroke. At 80, Ashaji with all her years of experience as a singer of unlimited range brings those vocal emotions into visual terms.


Yes, Ashaji does tend to under-act or not act at all in the more dramatic moments. But that inability to give a virtuoso performance in the high emotional moments is a part of the singer-turned actor's natural grace and appeal.


The film brings up a very vital domestic issue. Why does a parent become a burden for the children after a certain age? Hence when Mai's son decided to go abroad without the mother, the daughter has no choice but to take the mother into her two-bedroom home. Then begins the taunts and the jibes. The resistance to an old forgetful Alzeihmers-ridden matriarch in the house is well-crafted into the fluid thought simplistic screenplay.


Mai's son-in-law (Ram Kapoor) and teenage daughter put up a stout fight against what they see as an invasion of their privacy. These scenes are done with much inner conviction and a genuine emotional affinity to the virtues of the joint-family system.


Put on the crossfire between her husband-daughter and her frail vulnerable ailing mother, the daughter's dilemma is vividly portrayed by Padmini Kolhpure. Indeed this is Ms Kolhapure's finest performance in a very long time. She brings ample credibility to her part, as does the talented Ram Kapoor as her husband. The fringe characters also benefit from a screenplay which seems to know its heart better than its mind. The scenes are suffused with a high emotional quotient but don't always display a high level of intellectual involvement in the way the crises grows in the plot.


The characters such as the Marathi maidservant and Padmini Kolhapure's helpful boss at her workplace seem to be constructed from stereotypical role models and are therefore more symbolical than substantial.


Nonetheless the film's emotional content sees it through. The central mother-daughter relationship is played out at a controlled octave with both Ashaji and Padmini pitching in heartfelt moments that suggest they empathize fully with their characters' emotions.


The cinematography by Sachin Kumar Krishnan captures domestic details of the middleclass household with some amount of understated radiance. Nitin Shankar's music especially the lullaby sung by Asha Bhosle resonates across the plot.


Mai often leaves us teary-eyed with its portrayal of a generation that doesn't know how to value its elders. The treatment of the theme is stiff and prosaic at times. But Asha Bhosleji's melts all our misgivings. Her innate warmth connects well with the audience.


This is one mother we would all like to bring home.