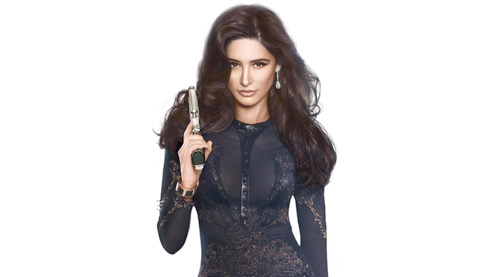 Your first international film Spy is releasing in India this Friday. What should the audience expect in the film?

The film is a summer hit already internationally. So the audience can expect tons of action, drama and of course comedy. Every character plays an important part in this film and they are all perfectly cast and played.


Have you seen the film?
I have seen this film three times and would go three more times to watch it. My character Lia is quite a surprise. So, I'll just let you go and see.


You are seen as a pivotal character on the poster. That's quite impressive. How did you bag this assignment?

How I bagged this assignment is a bit long. So, I'll give you the short version (laughs). I met the director Paul Feig and his lovely wife Laurie a couple of years back. Paul and his wife are global beings, and they are fans of international cinema. So, he was aware of the work I have done. Then one day, over dinner he asked if I would be interested in this role.


And what was your reaction?

My character's name is Lia. When he explained the role and told me about Spy, I knew this was such an amazing opportunity. I loved the story and I loved his other films liked Bridesmaids and The Heat. Plus, I loved my character. So it was a no-brainer and I accepted.


Tell us about the training that you underwent to do the stunts?

I had to train for about a week with a professional action team. We trained about six hours a day and I went back to my room to do some of my own practice.


You were injured while doing the stunts?
I learnt choreographed sequences, but, of course on the sets, things can go wrong and it did and I did get hurt. But it was worth it.


Who among the co-stars did you get along with the best?

Everyone was extremely friendly and down to earth. The set-up for this Hollywood film was so warm and welcoming. Melissa McCarthy was so easy to work with. Really amusing and caring at the same time. It was really lovely to work as a team. Paul Feig is an amazing director and has great energy and knows how to create a relaxed and an enjoyable working atmosphere.

Jude Law was easy to chat with and Jason Statham was a really funny bloke. The ladies were extremely friendly and social. Rose, Miranda and the rest of the gang so inviting and easy going and of course all of them hilarious on and off set.

I think the entire shooting schedule for me was so exciting and fun. I have to say it was one of the most comfortable and fun shoots I have ever been on. I really felt great working with everyone. In fact, I had such a great time I stayed an extra week just to hang and enjoy where I was.


What was the premiere like? Did you have some heart stopping red-carpet moments?

I thought I would be nervous and anxious but you know what?â€¦ I felt right at home. It was a perfect day. You know when something just feels so right, everything goes smoothly and beautifully.


Anything new in Bollywood?

Yes, two films that I'm very excited about. They are very different from each other. I'll be extremely busy till the end of this year. It's overwhelming, exciting and frightening all at the same time.


You seem to be spending quite a lot of time outside India these days. Bollywood may start thinking you are planning to move on?

Well, I enjoy travelling. And living my life the way I want to, is most important to my happiness and wellbeing. I definitely would never "move on" from Bollywood, but, I think I like to spend time in Mumbai, work and also travel as much as I can. I'd be a happy little camper that way.