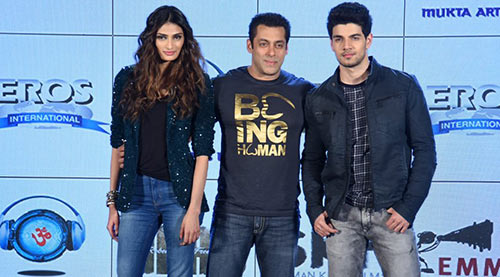 "I think Sooraj and Athiya have it in them and I can't be so off," said Salman Khan in a Bollywood Hungama exclusive interview with Faridoon Shahryar. The 'Hero Music

Concert' was about to start at Taj Lands End Hotel in Mumbai and Salman, Sooraj Pancholi and Athiya Shetty spoke to me in a relaxed and jovial manner. There was no sign of stress or tension. The

air was filled with confidence. "Everyone has loved the promos; everyone is loving both of them. They have already been accepted by the people," Salman said reassuringly as the debutantes looked at

him with awe and admiration. Now over to an engaging conversation with The Superstar and his budding Proteges...

Of all the songs that Salman has sung in movies, do you feel 'Main Hoon Hero Tera' is the best?

Athiya: Of course. It is my favourite.

Sooraj: Yes it is my favourite.

Salman: I like the other one better, 'O Khuda'. I wanted to sing it but couldn't sing it as it is too high.

Karan Johar has seen Hero, loved it and tweeted about it.

Salman: I am so happy. He has called up everyone. He has genuinely liked the movie.

Karan has loved the performances of Athiya and Sooraj

Has he spoken to you?

Athiya: He has spoken to my parents but I don't know what he said.

Salman: I think he (Karan) has spoken to them and signed Athiya for a movie (jokingly)


Salman, Zarina ji said recently that once you had lifted Sooraj on your shoulder

Salman: We had gone to see Michael Jackson's concert.

Sooraj: By the time Michael Jackson came I had gone to sleep and when I woke up Daler Mehndi was performing.

Salman, what do you have to say about Sooraj and Athiya?

Salman: I have already said by signing them. Now it depends on the release on Friday. The good wishes of their father and the hard work of these kids should definitely pay off on the

Friday. I think they have it in them and I can't be so off. I can but I know what the audience likes and I see their reaction. They have come to me when I saw people looking at them, wanting to

talk to them, want to know them. If you have that quality that means you've already been accepted by people. Everyone has loved the promos, everyone is loving both of them. They have already been

accepted by the people who watch the promos.

Both Sooraj and Athiya are displaying a wonderful command on the Emotional level in the promos which is very heartening.

Salman: It is because both of them are really good actors. First concentration is not dancing, nor the action, first was if they can emote, if their performance is going to be heartfelt. We