Ranveer Singh’s new look from Simmba is out and we can't keep calm. Ranveer calls himself ‘Rohit  Shetty’s’ hero; Rohit Shetty calls him ‘a dynamite’. Well, it's a title well deserved for someone as vivaciously mind-blowing as Ranveer aka Baba! We have seen, with the little commercials that the two have done, that Rohit-Ranveer Jodi is pure fire on-screen and the very fact that they are collaborating on a full-fledged project has piqued a lot of interest already. 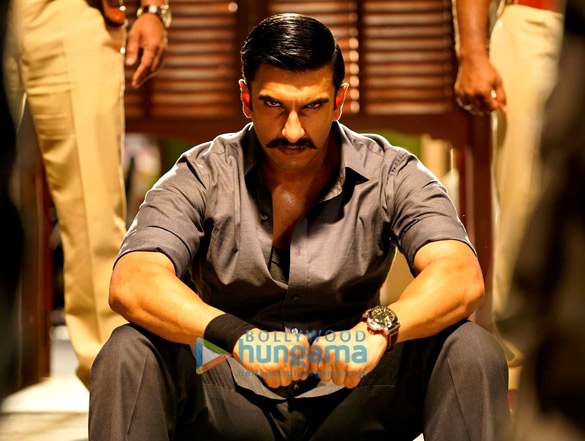 Ranveer has gone for a typical handlebar mustache and beefy look for the flick as he will be essaying the role of a cop in the movie. Shetty always knows how to get the bearing of his characters right. The way he transformed Ajay Devgn into Singham is a proof enough. We are interested to see how he plays with Ranveer Singh's character in the movie. For one, it would be totally different than the earlier roles played by the actor. Simmba is positioned as a total masala commercial flick and will cater to the masses. It is interesting because Ranveer’s last film has been a historical drama Padmaavat where he played an anti-hero Allaudin Khilji. His next with Zoya Akhtar, Gully Boy, will feature him as a Mumbai based rapper. In Kabir Khan's next, he will play the celebrated cricketer Kapil Dev. Simmba will showcase him in an out-and-out commercial avatar after a long time! And to add to the excitement, Sara Ali Khan will play his leading lady and there is a lot of hype to see their pairing for the first time.

Also Read: SIMMBA: Ranveer Singh shows off his beefy muscles as he preps in Hyderabad