The new poster of Mirzapur 2 is quite telling of the bhaukaal that lies ahead in the new season of Amazon Prime’s tentpole show which returns on October 23. The show’s first season finished at a delicious point that calls for revenge. While Ali’s character had a considerable amount of action last season, for Shweta the show is uncharted territory. 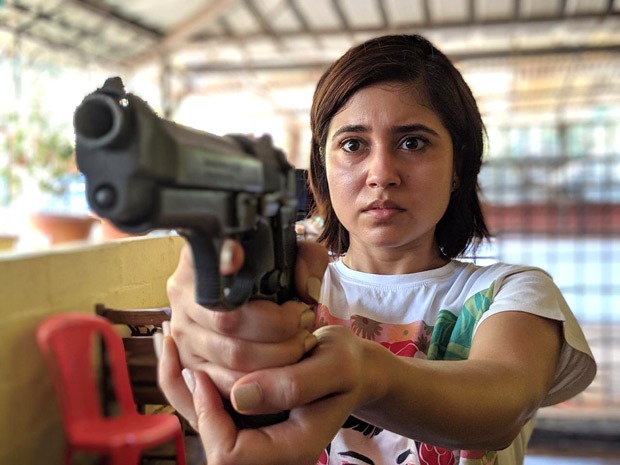 In the first season itself, her character Golu comes off as a no-nonsense, resilient woman but it’s in the new season that her character blooms completely. Up in arms to avenge her sister’s death, the actress will be seen doing a lot of heavy-duty action scenes. She says “I still remember the first time I held a gun; the loud shook me completely. I knew right then that I had to train for this. We used real guns and so I worked with stunt director Manohar Verma for the next 10 days at his training arcade near Film City."

She added, "I used to take Cheeta (Chaitnya Sharma, husband) on training sessions and he was supremely excited to see me push the boundaries and prepare for Golu 2.0. I used to put on earplugs and music while training. The real confidence came on the set. While emoting and blazing guns, making sure it’s all smooth, was a tough one to pull off. Especially for someone like me because I don’t like violence but this is not Shweta but Golu's journey. I am living Golu’s life. One of my first days of shoot in Mumbai, and I extensively prepared myself emotionally. This is the first time I was doing the action and I had started much in advance to train physically. The character has an interesting arc and we see her in a very different light in this season. She couldn’t have looked like Golu from season 1. I would finish shooting and train daily. We don’t see many women holding guns so if I am doing it, I wanted to do it well.”

Shweta says it’s important to work with people you trust. “Gun training was important but masterji would keep reminding me that it has to be Golu’s emotions. It was a tough part to crack and when that happens with a character you know every beat of and have played for an entire season, it’s thrilling. I prepped extensively on action scenes because stunt doubles could compromise on authenticity. We would be taught the action scenes, it would be well-choreographed and rehearsed before we shoot them. Action is like choreography. Every step has to be planned. You have to know it well and there can be no room for improvisations because you are not responsible just for yourself but people around you.  This whole experience was so much and one of the most memorable character preparations ever.”

ALSO READ: The new poster of Mirzapur 2 features Ali Fazal and Shweta Tripathi with their swag on peak