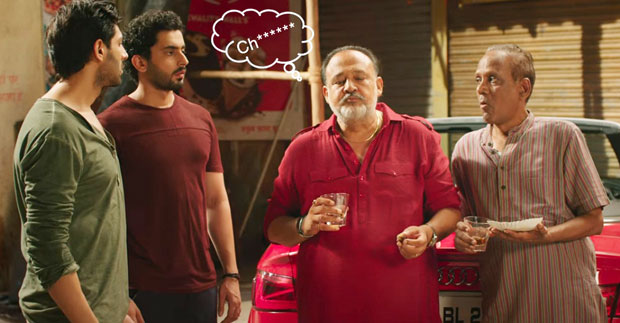 Alok Nath has been around for a long time. In most of the films, he was seen portraying a religious, god-fearing parent who is sweet and loving to his children. He could never be the strict disciplinarian – he’s always happy, smiling and giving good wishes and ‘aashirwad’ to anyone younger than him. Twitter suddenly realized this characteristic of his in 2013 and in no time, Alok Nath jokes and memes went viral. Alok Nath at first got shocked but then took it in his stride. The jokes went around for many, many months and later, it slipped into oblivion.

But now, Alok Nath is all set to make a 360 degree turn and shock viewers like never before. In the upcoming film Sonu Ke Titu Ki Sweety, Alok Nath essays a very distinct character. At one point, in the trailer, he even abuses, believe it or not! Also, the way he does and the manner in which he’s standing and holding his alcohol glass is unlike what Alok Nath has done in other films or is popularly known for. The other sequence of Alok Nath in the trailer is where he sarcastically does an ‘awww’. And that’s hilarious! Often, the older generation of actors are more conservative and don’t want to indulge in abuses in films for the fear of getting severe backlash. In that regard, it’s really brave of Alok Nath to shed off his ‘sanskaari’ image and essay such a drastically different character.