SHINee's back! The popular South Korean group, from the second generation, has released their 7th regular repackage album titled 'Atlantis' as they splash vibrant colours through their music video. 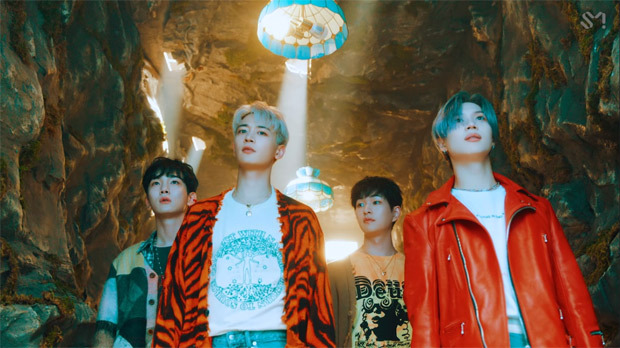 In the music video, SHINee members Onew, Minho, Key, and Taemin explore the underwater world and encounter deep feelings. It is a pop dance song with a rhythmic guitar and strings, brass, and percussion sounds harmonized over the bass line. The song expresses their love for someone deeper than the ocean, "My love goes deep deep deep / Your ocean deepened / Thickened Emotion / My love goеs deep deep / Leaving my whole body in the bluе / Towards you yeah yeah yeah."

The album contains 12 songs along with the 3 new ones including 'Atlantis', 'Days and Years' and 'Same Place'. Rapper Changmo participated in the lyrics of 'Atlantis'. The song is composed by Matt Thomson, Max Graham, James F Reynolds, Gabriel Brandes, Britt Pols, Engelina Andrina Tekst, Changmo, and Yoo Young Jin.

The multi-talented popular Korean group SHINee, who've been together for 13 years, has made their first comeback in several years. The long-awaited seventh full-length album titled 'Don't Call Me' is here and it is everything the fans hoped for! Along with the album comes the lead track with a fiery music video.

ALSO READ: SHINee is back with intense warning after being betrayed in love in powerful ‘Don’t Call Me’ music video