Actor Shilpa Shetty visited Vaishno Devi shrine in Jammu and Kashmir, on the same day that the Mumbai Police’s crime branch filed a chargesheet against her husband, businessman Raj Kundra, in the pornography case. 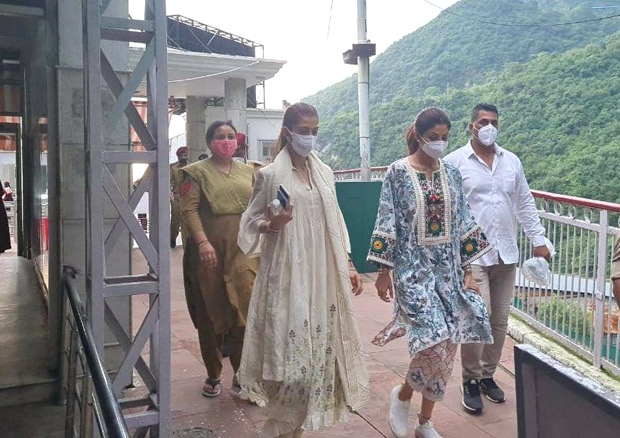 The police officials told the tabloids that, on Wednesday, Shilpa arrived at Katra which is the base camp of the cave shrine. Soon after her arrival, she undertook the journey to the shrine on a horse and was accompanied by the police personnel. Through out the journey, she chanted ‘Jai Mata Di’. Shilpa told the tabloids that she was very happy to be there and it was due to the goddesses' call that she came all the way to pay obeisance to her.

After her husband’s arrest in July, Shilpa took a break from her work. Some weeks later, she came back as one of the judges of the dance reality show Super Dancer. She also appeared in Hungama 2 in a supporting role which is her first film in over a decade.

Taking to her Instagram handle, Shilpa gave her sole statement that read, “Yes! The past few days have been challenging, on every front. There have been a lot of rumours and accusations. A lot of unwarranted aspersions on me cast by the media and (not so) well-wishers as well. A lot of trolling/questions posed… not only to me but also to my family. MY STAND… I HAVE NOT COMMENTED YET and will continue to refrain from doing so on this case as it is subjudice, so please stop attributing false quotes on my behalf.” She concluded by writing that they don’t deserve a media trial.

On Wednesday, Mumbai Police filed a supplementary chargesheet in a pornographic content case naming Raj Kundra. The nearly 1,500-page chargesheet against Raj Kundra, 45, and his associate Ryan Thorpe was filed before a magistrate court by the Mumbai crime branch. They have been booked under sections of the Indian Penal Code (IPC) related to sexual harassment and cheating, among others, as well provisions of the Information Technology Act and the Indecent Representation of Women (Prohibition) Act.

In April, the crime branch had filed the first chargesheet in the case against nine persons. On July 19, Raj Kundra and Ryan Thrope were arrested by the Mumbai crime branch and both are currently in jail under judicial custody. The case against Raj is related to the alleged creation of pornographic films and publishing them through some apps.