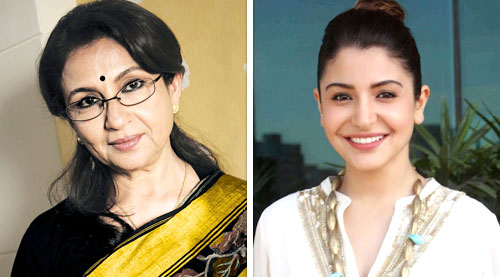 The iconic Sharmila Tagore knows exactly what Anushka Sharma is going through. Being in a relationship, then marrying one of India's most eligible cricketers, attending his matches under public scrutiny and making a life with Mansoor Ali Khan Pataudi, Sharmila defines the beautiful association of sports and cinema, often marred by unwanted attention.

Says Sharmila, "I can't say my circumstances were exactly the same. Because in those days (when I was dating Pataudi) girlfriends and wives were not allowed to accompany cricketers and watch cricket matches. But I did go to England to watch him, though I couldn't go to watch him in Australia. It's really up to the individual what he or she wants to do. No one is distracting anyone by being there for a loved one. Look at the crowds! They are so distracting, with their constant clapping, screaming and shouting. But once a player is out there his concentration is absolute."

Sharmila gives full credit to cricketers for keeping their cool under pressure. "These are not amateurs we're talking about. They know how to conduct themselves. But I've to say I've been through this kind of pendulum swing in public perception. An actor you are adored one day hated the next. Suddenly they go off you. If you remember when Sachin Tendulkar was not making runs his fans were upset. Then when he began making runs they all came back. Such temporary changes in the public's mood are only expected. One individual can't take on the mob. So one has to just stay calm and wait for the storm to pass. It's not an Indian phenomenon. It happens everywhere. It's the mature versus the immature."

The dimpled diva wonders how many out there really follow the game. "Only about 2 percent of the crowd really follow cricket. The rest is there for the excitement. They don't understand the pressures that cricketers have to face. It's all very well to sit and criticize the cricketers. But the person who has to go out there and actually bat has to face the heat of the moment. At least in our profession we get a retake. The cricketers have only chance. But I've to tell you, we actors also shoot under a lot of pressure. During outdoor shooting we have to complicated dramatic scenes while people stare, criticize loudly. As a professional cricketer you have to be very strong from inside. Peter May couldn't take the media pressure, and he couldn't play, though he was a great player. One shouldn't let all the attention get to you. We just have to concentrate on our work and believe in what we're doing. The crisis will pass."

Sharmila remembers being held responsible for Pataudi's non-performance on the field. "One or two occasions it was believed that I was somehow responsible for his poor performance. It is widely believed that if you are an actor or a cricketer from a privileged background then you're pampered spoilt and an attention seeker. So it was believed that I'd say things like. 'Oh if you're playing tomorrow let's go out today.' As if it was all about me and not the game of cricket. As if I didn't understand the gravity of the game. These are perceptions. One shouldn't allow them to ruin your happiness. If one wants to go watch someone close to oneself play, then one should do so."

Sharmila says things were different during her time. "There was no social media, no Twitter to condemn you. I think I had to face less hostility. Now you've people threatening to stone one's home. That's very wrong. This is the problem. There is a flip side to every fan. They love you and they hate you. I am not choosing the fans. They are choosing me. One day they say good things about me. The next day they start picking on you for the very things they loved you for. But in the long run it all evens out. Once you enter retirement they only remember good things about you."

Recalling her association with cricket, Sharmila says, "My affinity to the game didn't start with Pataudi. My parents in Kolkata were very keen on cricket. They wouldn't miss a single match. Because of them I got interested in cricket. Was cricket a common factor between me and Pataudi? I don't think so. But he liked the fact that I loved the game. Because I wouldn't get bored with the game."

She remembered her husband being away playing cricket abroad for six months at a stretch with no direct means of communication. "It was very difficult to keep in touch. All calls had to be booked by landlines. The call would come through at 1 am in the morning or whatever the time where he was. And this would be in a hotel. So there was no phone in the room in those days. I often ended up talking more to the telephone operators. When we got married all the telephone operators sent us congratulatory messages."

Coming back to the flak being faced by Anushka, Sharmila says, "Anyone in the public eye has to face bricks and roses. It's up to the individual to decide whether a loved one's presence distracts or comforts him."