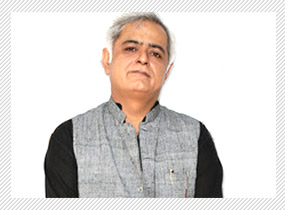 Shahid and the acclaim that it has brought to you even before release, comes after many years of struggle. Why do you think the film industry took its own time to recognize your talent?
I cannot blame my struggle or the industry for any lack of recognition. I believe you get what you deserve. After Jayate, Dil Pe Mat Le Yaar and Chhal, I should have stuck to my path rather than allowing myself to regress. But honestly, I have no regrets. The very fact that I have been able to make Shahid is sufficient retribution for all my sins!

You mean Woodstock Villa? Shahid explores an extremely volatile territory. How and why did you choose to tell a story that most filmmakers would be wary of touching?
Shahid was born out of growing angst about our times and also the need to break my own creative inertia. His story stared at me in the face. A young man, a lawyer killed in his office by unknown assailants and a journey that was truly remarkable. I think Shahid had an unfinished legacy that I was destined to take forward. Shahid reflects the concerns and frustration I have expressed in my earlier films about the common man and his inability to become a vehicle of change while complaining incessantly. The difference is that Shahid is inspired by a real life and despite the loss of a young life the film offers an optimistic future for the world provided we the people are willing to be the change.

I've seen you struggle to tell Shahid's story?
Shahid has consumed my being for over 4 years now from research, production, post-production, its successful festival run and promotion for a theatrical release in India. Today, I feel reluctant to let go. I feel I need to tell many such stories and that I need to make many more films. Shahid has suddenly got me alive and kicking after a few creatively comatose years.

The isolation and persecution of the Muslim minority is a subject of enormous sensitivity best left unexplored in cinema. What made you take the plunge?
It was Shahid's story that offered so much hope in the midst of such despair that prompted my decision contrary to the belief that I did it because my wife is Muslim. Issues like religious minorities, division and discrimination are part of this remarkable story. I have not taken these up consciously and I do not attempt to preach through the film. I just hope my film opens up sensible discourse around the country and audiences go back home examining their own prejudices and the way they lead their lives.

You wanted Ranbir Kapoor to play Shahid Azmi. What made you finally choose Raj Kumar?
I believe that just as Shahid is destiny's plan for me, Raj Kumar is destiny's plan for Shahid. No other actor could have played this complex character so free of baggage and with so much faith in my conviction. Raj Kumar never doubted my chequered filmography. Anurag Kashyap recommended him to me and Mukesh Chhabra (my casting director) ensured that I met him. Raj and I just connected. He is family to me today and truly one of the most gifted actors of his generation. He became Shahid and he will always be my Shahid. I owe all the accolades the film is gathering to Raj. As for Ranbir, that was an initial thought but I abandoned the idea because I had no access to him. He is a truly gifted actor and it would have been interesting to see him playing Shahid but stardom is sometimes a hindrance for a film as independent spirited as Shahid.

There are scenes and images of extremely humiliation and abject despair in your film. How tough was it for you to shoot these scenes? And how deeply impacted did they leave you?
Living Shahid's life through this film made everything else seem such a cakewalk. No hurdle or obstacle was too big any more. Shooting with some of the finest actors I have met in my career allowed me to approach each scene in an organic manner. Actors responded to the moment be it joy, despair, humiliation, grief or love. I made it my job to cover these various emotions as Shahid's story unfolded before me. There were moments of anguish in Shahid's life that left me disturbed but that was bound to happen as I was living his life with my actors. All my key collaborators including my writer Sameer, editor and co-writer Apurva Asrani and my cinematographer Anuj Dhawan lived Shahid's life with me and that made interpreting and presenting some of these scenes much easier. The scenes that you talk about have such an impact because somewhere all of us were experiencing this remarkable life.

You have been vocal about human rights and the politics of separatism and chauvinism in Maharashtra. How far do you think the story of Shahid resonates in the politics of Maharashtra and the country?
It is a discourse that I wish to have post the release of my film. Let the forces of separatism and chauvinism watch the film first. And then we shall talk!

As a filmmaker, how important is it for you to participate in the political conditions of the country through your cinema?
As a filmmaker, I would like to participate in films that reflect our times and deal with stories that I identify with. But my focus will always be on telling you stories through the medium. These stories might reflect my mood, angst, opinions or my awareness of issues but I will never pontificate or preach. I want to simply be a story-teller and tell new stories. That is what I always wanted. Hopefully, I will have the opportunity to do so after Shahid.

Would your next film be as gritty real and political as Shahid? Or would you like to change tracks?
First, I would like to take a breather and spend time with family. This year has been a roller coaster with the loss of my mother and on the other hand the journey of Shahid, which often feels meaningless without her. Shahid fortunately consumed me so much that I have been unable to grieve enough. Perhaps, I will finally get the time to grieve and to finally shed those tears for somebody who stood by me through all my mishaps and left me when I had the opportunity to do her proud.

Your mother?
Yes. There are some exciting stories to tell, and how they develop only time will tell.

Eijaz Khan spotted on the sets of a film…