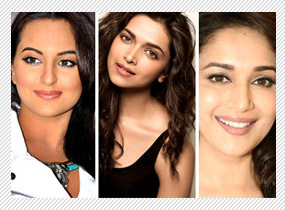 Sonakshi Sinha would be enjoying a double bill no less, what with Bullett Raja and R... Rajkumar releasing back to back in two consecutive weeks. On the other hand, Madhuri Dixit's Dedh Isqyiya and Gulaab Gang are slated to arrive on the same date next year. Now both actresses have company since Ileana D'Cruz would be going through the same situation soon.

"Now this is a situation that no actor would be happy to be a part of," quips an insider, "Especially when you have gone through your 'kabhi khushi' (Barfi! ) 'kabhi gham' (Phata Poster Nikhla Hero) moments in just one year stay in Bollywood."

Not everyone is as worried though. Viki Rajani, who has produced R... Rajkumar along with Sunil Lulla, doesn't see any disadvantage in two back to back Sonakshi starrers. He says, "Sonakshi is well organised and always known to honour her commitments. She is a very fine actor and can play two different characters quite well even if her films come next to each other."

One can well expect that from Ileana as well, considering the fact that she was the toast of the B-Town last year when came up with a controlled and mature act in Barfi! . However, an inconsequential role in the Shahid Kapoor starrer pulled things back for the Goan beauty. No wonder, her next two films with Saif Ali Khan and Varun Dhawan are quite crucial. However, with these films coming so close to each other, it would be the case of 'two much too soon' for her.

"In that case, just imagine how Madhuri Dixit would be feeling whose comeback films, Dedh Isqyiya and Gulaab Gang, are not even spaced by a week and are releasing on the same day i.e. 10th January," quips a trade Guru.

Though no one associated with the two films is willing to go on record yet, a source close to Anubhav Sinha's Gulaab Gang says, "The film was announced first and so was the release date. It is only fair that Gulaab Gang arrives first."

One can well understand the plight of the producers here who are left to fend for the best week available. Considering the fact that everyone looks for an open week ahead, it becomes imperative that an actor is trapped in a situation like this. This is the case with Kangna Ranaut as well whose Krrish 3 and Rajjo is separated by just two weeks. "These are two totally different films though," says Kangna, who plays a negative character in the Hrithik Roshan starrer and a central protagonist in Rajjo where she plays a nautch girl.

With Sonakshi, Kangna and Madhuri to experience the double bill dose much before, Ileana D'Cruz may well get some tips on how to let go off some nervous moments ahead. She could take heart from this with Saif and Varun as her co-stars in time to come. Still, she could well be gearing up for some gruelling promotional schedule of both her films which would begin and conclude around the same time, hence promising a 24X7 outing for her.

"She can't do anything about the release dates though as it is a call best left to the producers. Saif Ali Khan and Ekta Kapoor would do what's best for their films and as of now, none are budging from their spot. Both are sure about bringing their respective films on these dates," the insider adds.

Well, she could even take a cue from Deepika Padukone who, in last 12 months, has already seen four of her films arrive (and turn into massive successes) and would have two more - Ram Leela and Kochadaiiyaan - to hit the screens before 2013 end. Phew!

'Close' releases in the coming weeks:


-Bullett Raja and R... Rajkumar - Both star Sonakshi Sinha and are separated by just one week


-Happy Ending and Main Tera Hero - Both star Ileana D'Cruz and are separated by just one week.