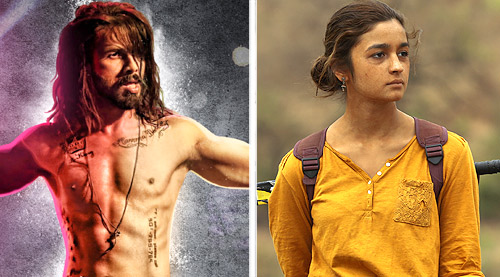 "I hope we allow adults to view content which is relevant as opposed to just meaningless entertainment. Our films need to be honest," said Shahid Kapoor in a Bollywood Hungama video interview with Content Head Broadband Faridoon Shahryar. Shahid was reacting to the speculation that the Revisiting Committee is backing the cuts suggested by the Censor Board with regards to Udta Punjab. There are rumours that the word 'Punjab' may have to go. Shahid refused to comment on that and stated that the team will get the official statement in the form of a letter and then only can they take the matter forward.

Shahid Kapoor passionately spoke about the importance of the subject of the film by saying, "The larger context of Udta Punjab needs to be understood. I feel if the government watches it they should make it tax free. Drug menace is a problem faced by the entire generation and the message of the film is 'Drugs Di Maa Di' which is against the substance abuse, it is a message which needs to reach out to as many people as possible. This issue is not specific to one state. It may be less in one state and more in other states. Border states are more vulnerable. It is a problem with the entire generation. The awareness of where to get it and how to get it is so high, the curiosity is so large, the whole cool quotient is so high that most of them will end up trying it and end up being dependant on it. It is a pressing issue. When I was 20 it was not a problem for me but for a 20 year old today, even a 15 year old today, it is a relevant issue. We must allow the youth of this country to get educated about it, what's wrong with it. The message of the film is extremely positive and it needs support."

It is being said that politics is playing a part as well since assembly elections are scheduled to be held in Punjab in 2017 and drugs is a burning topic. "I am not a politician so I can't comment on that. I don't want to get into that. Right now the film is going through the Censor Board and the Revising Committee," Shahid said.

Earlier in the day yesterday, Bollywood Hungama interviewed Alia Bhatt. She stated that the producers are trying their best to get the best possible result with regards to the tussle with the Censor Board and the Revising Committee. "My only wish is that the country and the world get to watch Udta Punjab in its true form. I will be thoroughly disappointed if it doesn't release in its true form," Alia said.

In the meanwhile many senior industry voices including Karan Johar and Ram Gopal Varma are backing the team of Udta Punjab in this battle with the Censor Board. It remains to be seen who all join in. If the film industry doesn't come together then they won't have anyone other than themselves to blame for the rampant Talibanisation of Censor woes in India.