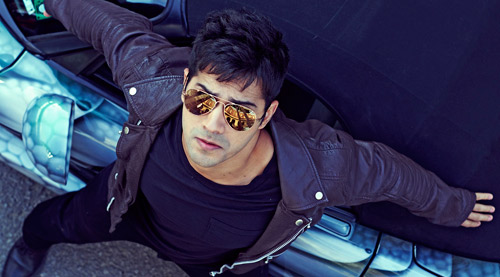 5 films, 5 successes and a 100% track record so far. A record like this would be enviable for the best of the stars, especially those who are emerging in Bollywood. Varun

Dhawan, with Student of the Year, Main Tera Hero, Humpty Sharma Ki Dulhaniya, Badlapur and ABCD - Any Body Can Dance 2 behind him, is now getting ready for the release of Dilwale. The

biggest film of his till date, it also features him alongside superstar Shah Rukh Khan, which is a reason for him to rejoice as well. Even as Varun gears up for the success of the film which could

well spell a double hat-trick for him, he gets into a relaxed chat with us.

So how big a Dilwale have you turned out for this film, both as a character as well as the actor?

Quite big, you know. See, I am such a big 'dilwala'. For the film, I have sacrificed my sleep and even gym (smiles). I am regularly promoting the film. I have my selfish motive in doing so as well.

I am learning so much about film marketing from Shah Rukh Khan. The way he packages his films, the way he markets them, the manner in which he takes care of the detailing. Now that's an experience

which money can't buy. I have been working non-stop as well. From Badlapur I moved on to ABCD 2 and then soon into Dilwale for which we shot for around 160-170 days.

It is quite apparent that the film has you as a regular guy with a brother who has a larger than life past to boast of. You seem to be having a lot of fun doing such an out and out 'masala'

You know, 'masala' is always such a double edged sword. It is quite interesting in the film because Shah Rukh sir's character is supposed to have a past about which I am not supposed to know

anything about. So here I am, living with someone and believing that he is decent and nice character. And then there is a revelation that 'arrey, this guy used to be with mafia'. It is quite scary

also for that matter. So in the film, my brother doesn't want me to know about his. So in the house I play this cool one who then gets to know that in his younger days, his brother was actually a

stud. It is a very big important reveal in the film.

The film has you and Rohit coming in together. It must be wonderful to work with someone who also follows David Dhawan brand of unabashed masala entertainers?

Dad really loves Rohit sir and he is really looking forward to Dilwale. I too love Rohit and his films; it is a big honor to be doing this one with him. His style of cinema, action and

direction is unique. People might sometimes make fun of this thing that cars udh rahi hain and all that. However, ask a man on the street and he will tell you how much he is fascinated with this

entire car thing. See, regular people haven't seen so many cars of different shapes and sizes in real life. In fact we have even modified many cars to make them look all the more jazzy, trendy and

stylish. It is fun to have it all around you.

As for Shah Rukh Khan, you have grown right in front of him over last two decades. Now to be acting alongside him must be something, right?

Shah Rukh makes it all so easy because of him being so cool as a co-star. That helps me do things the way I want. Yes, to begin with I felt that 'Oh, I am working with Shah Rukh Khan', but he came

forward to make sure that I don't continue feeling that way. So that fear went on in the first day itself went. Then Rohit sir also told me that I couldn't keep thinking about Shah Rukh Khan's

presence all the time. He told me that 'tu khul kar acting kar'. Because of his faith in me and the way he pushed me, it all turned out into a breeze in the end.

Did you also converse with Shah Rukh Khan around your own career progression so far?

I have spoken to him about choices for sure. He has a straight forward funda in life that one should do films from heart while keeping economics in mind. That's what he taught me. So if you are

doing commercial films, then believe in it. I want to reach out to the whole country and I agree with him when it comes to following one's heart. That's what he is doing as he would next be seen in

Fan and Raees, which are such interesting films. This is an exciting line up that he has and as his follower, I am looking forward to these films for sure.