India remains unbeaten. The cricket team defeated Australia by 3 wickets on the fifth day during the final Test at the Gabba in Brisbane on January 19, 2021, as they won the Border-Gavaskar Trophy. As Test Captain Ajinkya Rahane scored cheers, the young cricket team won accolades from people across the nation. Cricketer Rishabh Pant was the star of the game who remained unbeaten with 89 runs off 138 balls. 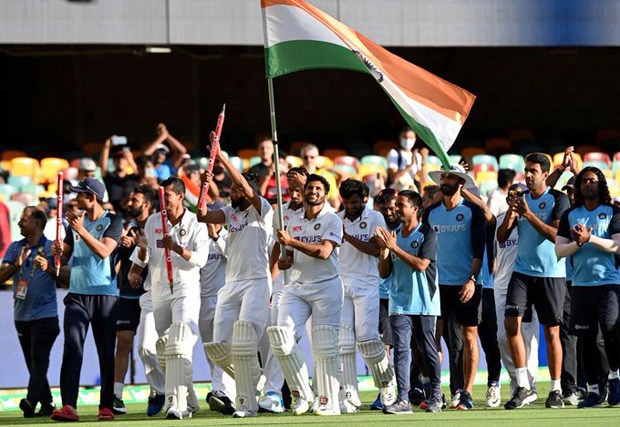 With cheers and love spreading across social media, Bollywood celebrities including Shah Rukh Khan, Ranveer Singh, Farhan Akhtar, Karan Johar, among others took to Twitter to celebrate the remarkable win of India.

What an absolutely marvellous victory for our team!!! Stayed up all night to watch it unfold ball by ball. Now will sleep peacefully for a bit and savour this historic moment. Love to all our boys and greatly admire their resilience to power us through to this win. Chak De India!

India Zindabad .....proud of you Team India - this is a huge huge win. Congratulations Captain @ajinkyarahane88

Well done India.
Well done #TeamIndia .
Well done Test cricket.
So many emotions that words might just get in the way...
Keeping it simple.
Thank you boys, what a feeling!!!!
.#AUSvsIND

Congratulations and thanks for this proud moment, #TeamIndia! #INDvsAUS

Tears rolling down my eyes. The last time I got so emotional was at Wankhede when India lifted the WC. Take a bow Team India. Aye aye captain @ajinkyarahane88 ???????? #INDvsAUS #TeamIndia #GabbaTest pic.twitter.com/SCJXCjZTkz

OMG !!! What a WIN ???????? #Gabba has been breached & conquered and with it #TeamIndia moves to the No 1 spot in the World Test ranking ????????What grit, determination & strength of character shown by the boys in Blue ???? #INDvAUS #Champions #JaiHind #Ting ❤️ pic.twitter.com/t8mrpkBmjo

Can’t believe I’m in tears while typing this ???? But the grit, fearlessness and self belief of this team is so inspiring. It’s the same spirit I see in all the young entrepreneurs I meet and interact with. The future is in the right hands #IndiaRising ????????

ALSO READ: A chic tribute to Ranveer Singh's decade in cinema by a fan bowls the superstar over