Sara Ali Khan and Vicky Kaushal will be coming together for the first time in a film to be directed by Laxman Utekar. Needless to say, the new onscreen couple is already garnering attention. And the recent example of that was when the fans were excited to see them together in the city, working for the film. Sara and Vicky were spotted near a dancing studio and needless to say, fans were quite excited to see them. 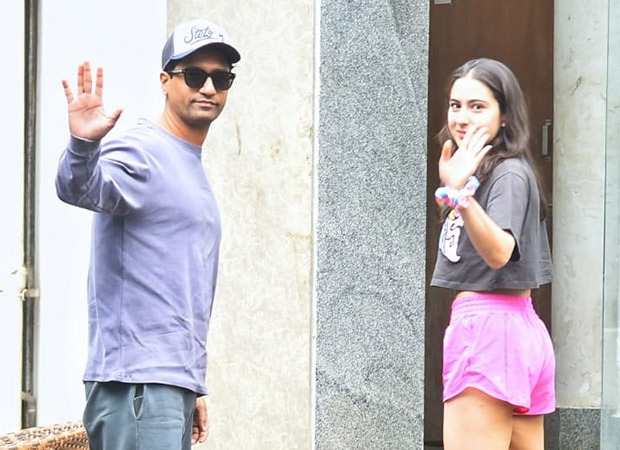 A source close to the actors confirmed the hoopla around Vicky Kaushal and Sara Ali Khan saying, “Fans are left mighty excited to see Vicky Kaushal and Sara Ali Khan join hands the duo join hands for the first time with the film. They can’t wait to see them appear on screen together in the upcoming Laxman Utekar film.” The video of the actors entering the dance studio has been garnering a lot of attention on social media, as fans couldn’t stop commenting on how they are eagerly waiting to see them on the big screen.

Fans dropped heart and fire emojis to show their excitement about seeing Vicky and Sara onscreen together. “Can't wait to watch their chemistry” said one fans whereas, “Yaayyyy finally” said another. Besides that, one of the fans also commented about seeing them dance together saying, “Maddock film is finally gonna have a dance number with these two.”

Speaking of the film, the untitled project which is produced by Maddock Films, is expected to be completed by the first half of next year, by January. On the work front, Sara Ali Khan will next be seen in Pawan Kriplani's Gaslight opposite Vikrant Massey. Vicky Kaushal, on the other hand, will be seen in Govinda Mera Naam which features Bhumi Pednekar and Kiara Advani in lead roles.

Also Read: Janhvi Kapoor quizzes Sara Ali Khan about Game Of Thrones ahead of the prequel House of the Dragon premiere, watch video