Bollywood star Ranveer Singh took a new turn in his career and recently made his television debut with The Big Picture. The Big Picture is the first visual-based quiz show which tests the knowledge and visual memory of the contestants. In the show, Ranveer Singh has been designated the role of the host. Recently, the actor was joined by Bollywood divas Sara Ali Khan and Janhvi Kapoor. 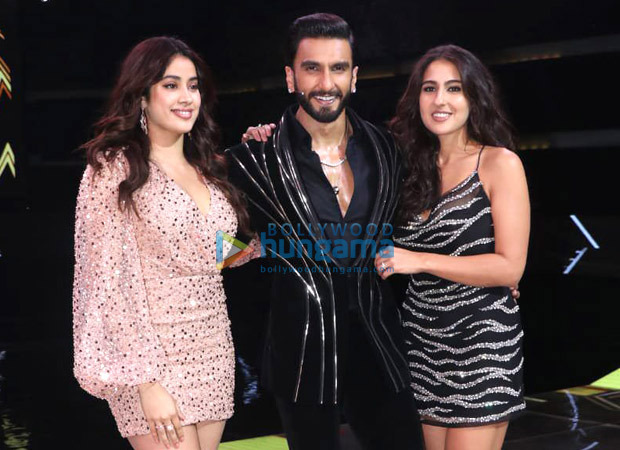 Sara and Janhvi will soon make an appearance on the quiz show as they were spotted on the sets of the show on Wednesday, October 20. Janhvi Kapoor was seen cladding a gorgeous sequin dress which was accessorised with statement stilettos. While Sara Ali Khan was seen slaying in a zebra print glitzy dress. While Ranveer opted for a black tuxedo with a silver detailing work along with same colour loafers and accessorized with silver pendant neck chain.

Probably the actresses have shot a special episode with Ranveer. It'd be really exciting to see all the three talented stars sharing the stage. The pictures have gone viral and created havoc on the internet.

On the work front, Ranveer Singh will be next seen in films Sooryavanshi and 83.