Sara Ali Khan, currently the most sought after actress of Bollywood, has been stealing thunders prior to her debut in Bollywood. Now, the actress shines as the cover girl for Harper's Bazaar for their June cover. The actress looks absolutely gorgeous in a yellow mustard wrap around dress with ruffle sleeves. The look is accessorized with a classic metal watch and metal bangles and messy hair. 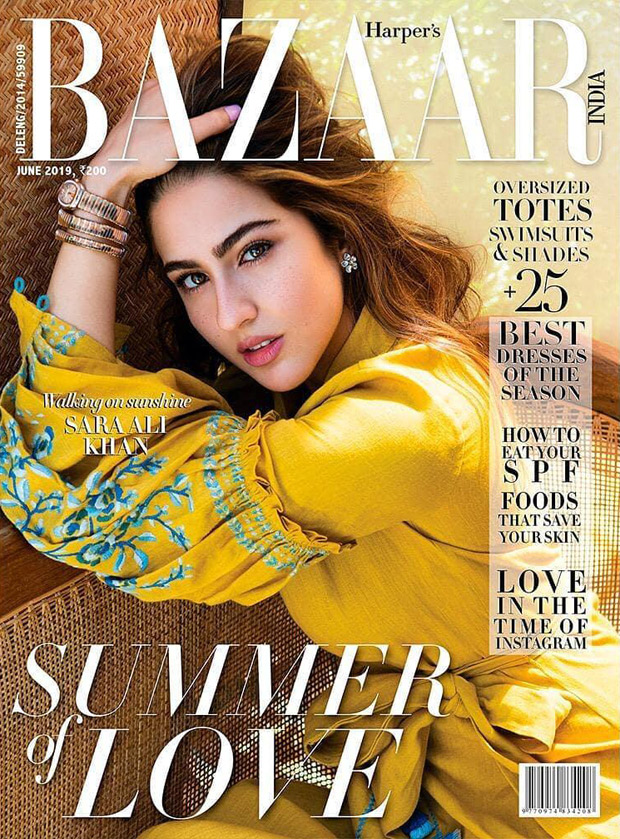 The magazine took to their social media handle to announce Sara Ali Khan as their cover girl on Tuesday. They wrote, "Our June cover ⭐ Sara Ali Khan (@saraalikhan95) has found a home in an industry she loves. With two films already under her belt, she has earned critical acclaim and social media stardom. And she's finding a way to live and work by her own rules. It's no wonder she can't stop smiling."

Sara Ali Khan had made a promising debut with Kedarnath and her second film Simmba went on a huge roll in the theatres with a commendable box office collection. For her performance in her debut film, Sara even won the Filmfare Award for the Best female debutante.

Sara Ali Khan, on the work front, will be next seen in recently announced Imtiaz Ali ‘s next alongside Kartik Aaryan and with Varun Dhawan in Coolie No. 1. Both the films are slated to release next year.

ALSO READ: These photos of Sara Ali Khan and Kartik Aaryan are holding hands are making fans go gaga all over!