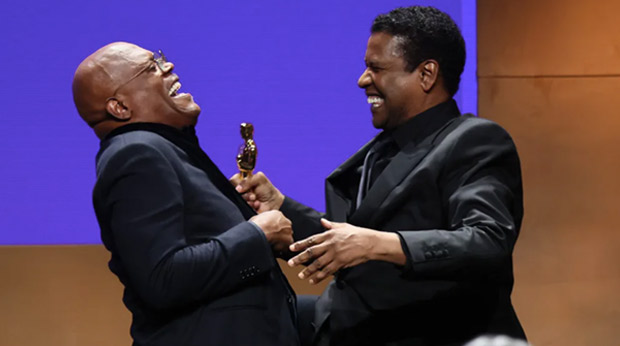 On Friday, the Pulp Fiction star was presented with an honorary Academy Award for lifetime achievement by his longtime friend Denzel Washington in a non-televised ceremony. As People magazine reports, prior to welcoming the veteran actor onstage, Washington appeared to salute Jackson before warmly remarking on their personal and professional association, noting Jackson's status as the actor with the greatest total box office gross of all time, over $27 billion worldwide.

Denzel Washington also highlighted his longtime friend’s achievements and a list of charities he has worked with throughout his career. “Sam and I go back in the theater, the Goodman Theatre,” he shared. “We worked together even before that, at the Negro Ensemble Company. We did a pretty good play called The Soldier's Play that became great movie, A Soldier's Story. Wasn't as good as it would've been had Sam been in it, but that's for another day.”

I think you want to see just a little more of how excited Denzel and Samuel L. Jackson are now that the latter has his honorary Oscar pic.twitter.com/O0h8j75RDa

Since his Hollywood debut 50 years ago, the 73-year-old actor has appeared in more than 150 films in his career and went on to become the highest-grossing actor of all time. The prolific actor is recognised for his notable performances in Jurassic Park (1993), Pulp Fiction (1994), Star Wars (1999-2005), Die Hard with a Vengeance (1995), Iron Man (2008) and many more. For his role in Pulp Fiction, Jackson was nominated for Best Supporting Actor at the 1995 Academy Awards.

Upon accepting the honorary award, Jackson touched on his long-lived friendship with Washington, saying, “We've come a long way and done a lot of things. So I'm really, really proud to receive this statue,” he said before thanking the Governors for the recognition. "Who knows, that little kid from Chattanooga, Tennessee, watching movies, wishing he could be here to get the votes of people who run an organization like this that says, 'Hey, I deserve something like this,' thank you, so much.”

“When I got the opportunity, I tried to represent this business the best I do now," he said after thanking his wife of 42 years, LaTanya Richardson Jackson, and their daughter Zoe, calling them "his biggest critics and biggest fans. “I got out there to entertain audiences the way Hollywood entertained me. Make them forget their lives for a few hours and be thrilled, awed, or excited at the big room where make believe lives,” Jackson continued.

“Thanks to every person who has ever bought a ticket to any movie I was in. It's truly been an honor and a pleasure to entertain you,” he concluded his emotional speech. Per the report, the ceremony also honored actress, writer, and director Elaine May, actress and director Liv Ullmann, and actor Danny Glover, who received the Jean Hersholt Humanitarian Award.