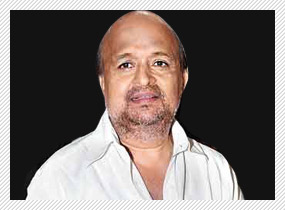 Being in the business for 30 years with over 500 films on his oeuvre and still remaining in the frontline amidst lyricists a decade or more junior is Sameer Anjaan's standout accomplishment. Not only does it show his adaptability and range as a writer, but also spotlights an obvious flair for blending famously with the younger generation of associates and listeners.

Right now, all genuine charts are dominated by his latest cult song 'Dagabaaz Re' from Dabanng 2, and 'Long Drive' and 'Balma' from Khiladi 786, songs that have broken the barriers of demographics like metros and small towns or Gen-Y and older listeners. Just two years, his sole contribution to Raajneeti, the raag-heavy 'More Piya Mose Bolat Nahin' from Raajneeti proved to be another such barrier-smasher, ending up as the most downloaded film track of 2010. At the other end of the spectrum in the same year had come the funky 'Chaar Baj Gaye' (F.A.L.T.U.).

The son of the iconic Anjaan, one of Amitabh Bachchan's favourites who penned songs ranging from Don and Namak Halaal is uber-cool as we chat over chai at his home.

For the last 22 years since Dil and Aashiqui, it's been a fairly even keel for you. Your composers kept changing though, as older associates lost ground and younger ones replaced them.

Yes, from Anand-Milind and Nadeem-Shravan, I moved to Anu Malik and Jatin-Lalit and later to Himesh Reshammiya, Pritam and Shankar-Ehsaan-Loy. But honestly, there were times when the changeovers affected me. The foremost crisis came around 2008 when Himesh Reshammiya, with whom my team was going great, stopped freelance work and began to do very few films. Around that time, I also stopped working with a leading composer because our working styles did not jell. For more than a year I worked largely on small films.

And then came F.A.L.T.U. , but things went wrong with Sachin-Jigar and you.

Yes, Vashu Bhagnani has always been very loyal to me and frankly I had a lot of hopes from Sachin-Jigar in forming another hit team with me, because I felt that they had the right mix of depth and youth. F.A.L.T.U. removed two industry blocks - one, that I was finished, and two, that older lyricists could never write songs that were young in tenor and connected with the youth.
On the Sachin-Jigar front, they betrayed me by crediting songs I had written to someone else for personal reasons, that too at a time when I was recommending them to so many producers! It left a bad taste because I had never experienced such things before.

All this, however, taught me some lessons. One, that regardless of your age, it is always your ongoing work that counts and contributes 90 percent to how your career moves. I realized that market mein aap ka kaam aana zaroori hai! The music scene had changed, established playback singers were singing less and less, music was getting lesser importance in certain kinds of films and it was therefore important that people missed you!

But except for Housefull 2, you did not work on any solo films this year.

Yes, because another lesson I learnt is that for a veteran to show that he was not commercially over or exhausted in terms of talent, two things were vital: one, that I should be a part of fewer but bigger films and two, that my lyrics had to stand out among the younger writers from the same film, which I proved with 'Bichhdan' (Son Of Sardaar), 'Dagabaaz Re' (Dabangg 2) and 'Long Drive' and 'Balma' (Khiladi 786).

Once I reposition myself completely as a writer in sync with the youth, I will stop accept multi-lyricist films, except maybe with Himesh Reshammiya who now has a huge bank of songs from which it was impossible to write all when he was building it up.

With solid desi melody ruling the charts but new-age music also in the fray, how do you see things going in the times to come?

I see a lot of things changing. After the Copyright Amendment Act, I foresee a time when all music companies will step up production. Everyone will be increasingly working for themselves as they know that royalties will only come in if the music is a hit. I give things one more year for the entire industry to be able to see the complete change.

I see at least one solid musical like Julie, Qayamat Se Qayamat Tak or Aashiqui coming in that will completely restore the importance and market supremacy of the musical film and change the game completely.

By the way, let me tell you something very interesting: more than 10 years ago, Nadeem (of Nadeem-Shravan) had predicted that the future of Hindi cinema would lay in a combination of corporate culture and composers and lyricists getting justice for their creative copyrights!

You seem to observe what's going on very keenly.

You must, to be able to survive. One has to break barriers and write in contemporary lingo without losing one's identity. Older writers must prove that they can connect with the young listeners and strike a rapport and make a mark in the market. Because I firmly believe that lyricists get better with age. And when you do get the opportunity, you should go all the way and not be afraid of doing justice to the chance you have got.


Let me tell you something very interesting about reinvention. I have been, apart from my father, a huge admirer of Anand Bakshi-saab and Majrooh Sultanpuri-saab in particular. But when I listened carefully to Bakshi-saab's songs of Gupt, it struck me that Bakshi-saab was trying to simplify his language and emulate my style, of course without losing his signature touch! It is vital to move with the times!


You were always accused of writing flippant rhyme. But suddenly people who ran you down are admiring your lyrics. Your take on this?

I think that they are just comparing my work with what is happening around. I cannot write without a certain thought and since I usually write to a tune, the composition is also important and determines what I write, whether it is 'Anarkali Disco Chali' or 'Dagabaaz Re'.

Dabangg 2 marks a film with Salman Khan after seven years, while you have also been away from the other Khans.

Sajid-Wajid knew about this song and we had readied it long ago. The song seemed to fit the situation given to them and we made Arbaaz Khan listen to it. He liked it but told us that Salman Khan would have to approve it too. And he loved it.

As for the other Khans, I have always delivered in their films, come Raja Hindustani or Kuch Kuch Hota Hai.

Have any lyrics impressed you in recent films?

I really liked a few songs in Barfi! and I love the lyrics of Rajkumar Hirani's films. I think that the director is the key to having great lyrics. I enjoyed writing for Krrish 3, my first film with Rakesh Roshan. I am enjoying working with Sudhir Mishra for Inkaar.

You mentioned Aashiqui as a game-changer musical. Would you not like to work with Mahesh Bhatt?

Why not? But if we have to come together, they should be new kinds of songs for the team of Mahesh Bhatt and Sameer not echoes of our many past hits together.

EXCLUSIVE: "Comfort is the key" - says…

"I'd like him to be an actor" says Saif Ali…

EXCLUSIVE: “It’s not been a perfect journey…