Bollywood actor Salman Khan may not be too active on Instagram  but he totally knows how to own the game. His captions are always humorous and on point. 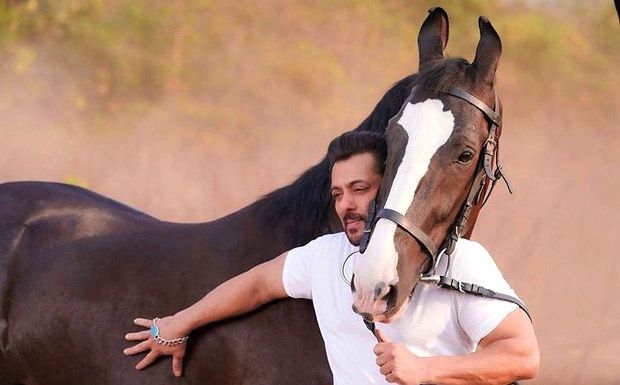 On Friday, he shared a photo with a horse on his Instagram and captioned it, “Horse’s mouth ..” In the photo, Salman holds the animal close to him. His one hand comforts the horse as he grabs the rein with the other hand.

Recently, the Tiger star was in the news after a snake bit him hours before his birthday. Talking about the snake bite, Salman spoke to the media and said, “It wasn’t much, a snake had entered one of the rooms, the farmhouse is quite in the jungle in Panvel. When the snake entered the room, kids got scared so I went in to see and asked for a stick, the stick that came was a small one so I asked for a longer stick, and they got one, with which I picked up the snake with a lot of love and brought it out, and the snake wrapped itself on the stick and then it started climbing upwards. It came quite close to my hand so I caught it with my other hand and dropped the stick to be able to leave the snake (in the jungle).”

Known for his dry sense of humor, the actor even gave details about how the reptile bit him. “The villagers know when snakes come around. This was a kandhari snake, and they started screaming ‘kandhari, kandhari, kandhari’. That’s when the snake bit me once, then there was more chaos when they screamed ‘chaavla, chaavla, chaavla’ (the snake has bit), that’s when the snake bit me again. Then they all screamed ‘hospital, hospital, hospital’, saying that I should be taken to a hospital quickly. There was so much commotion, the snake was a bit venomous, and it bit me again. I was taken to the hospital, and there we came to know that it is a different kind of snake, not the great kandhari,” he shared.

On the work front, Salman Khan recently announced that he is working on the script of Bajrangi Bhaijaan 2 script along with KV Vijayendra Prasad. He also has Tiger 3, Kabhi Eid Kabhi Diwali, sequel of No Entry, and also plays a cameo in Shah Rukh Khan’s Pathan.