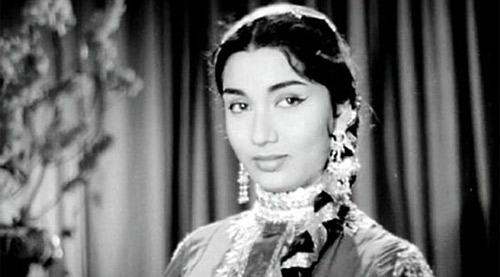 She was a strange mixture of the chilled-out and the no-nonsense woman of substance. Sadhana-Sadhana Nayyar to give her full name-was an interviewer's delight, if one could

ever get to sit with her and go through her memoirs. And this writer was among those very lucky few who got that opportunity after the actress quit films.


There was the fire and twinkle in the eyes that fans and associates alike must have adored at her peak, the grace and stately carriage associated with a true-blue enigmatic huge and trendsetting

star, and loads of humour.


Yes, she was past 70, but that was inconsequential. The lady who made her debut in a secondary lead in India's first-ever Sindhi film Abana (1958) and went on to make her lead debut in S.

Mukerji's Love In Simla (1960) was completely clued into contemporary Hindi cinema when I met her in 2011.


Candidly, she had stated that she loved Salman Khan for the "kind of larger-than-life quality that heroes of my time had", Shah Rukh Khan for "his true-blue star quality" and Aamir Khan "for his

hard work at becoming the character he was portraying". She had also declared that Madhuri Dixit-Nene was the last female icon and that 3 Idiots was one of the finest films she had ever

watched. Sadhana had also lavishly praised its lyrics and termed the music of Dabangg as the most refreshing score she had heard in a long, long while!


The classic and fragile beauty romanced by fellow iconic and other big stars of her times had only nine flops in her tally of 29 lead films! Most of these were her post-1970 delayed and fragmented

releases like Chhote Sarkar, Amaanat, Mehfil (in which she romanced a young Anil Dhawan after Jeetendra was dropped for "market reasons"!) and her last film, Ulfat, which was launched

two Raj Khosla-directed suspense thrillers, Woh Kaun Thi? and Mera Saaya. In the late '60s, when she suffered from hyperthyroidism, she was treated abroad and later gave hits like

Inteqam (her bold home production) and Ek Phool Do Mali, and successes like Sacchai, Aap Aaye Bahaar Ayee and Geeta Mera Naam (for which she even took the credit for

direction in times when a female director was virtually unknown, though the ghost-director was her husband R.K. Nayyar!)


Her favourite co-stars were Shammi Kapoor and Rajendra Kumar, and she made the point that in an era when there were virtually no multi-heroine films made, she had readily worked with Nanda (Hum

show way back in 1996. All attempts since to pin her down for an interview persistently failed. She was not giving interviews, said her PR.


The tide changed when she came out of her shell to receive a 'Lifetime Achievement' award abroad. She was seen momentarily on television, so I renewed my efforts. There was a way, said the PR

person-get to meet her at a club where she went to play Bridge every evening, where noted filmmaker Arjun Hingorani, who had introduced Dharmendra, would put in a word as he had been chief AD in


The ploy worked, and the fact that she had just won a game of Bridge had ensured a great mood. She had guests and our meeting would take a week more, she said. It took a month, but was worth it.

The stylish decor in her old bungalow, with tea and biscuits surfacing minutes after entry, and the actress' broad smile all showed that the good old '60s charisma was untouched.


"I had always wanted to do films, and my parents had no objection," she had said. "In Mumbai, I studied in Jai Hind College and was noticed in a college play by director Deepak Asha, who was making

the first-ever Sindhi film. I got to play heroine Sheila Ramani's younger sister in that film, Abana."


The actress then applied for an advertisement that the studio baron S. Mukerji wanted new faces. After a year of training, she was cast opposite his debut-making son Joy Mukerji in Love In

Like Asha Parekh in particular, Sadhana was known for her brilliant songs from an assortment of giant composers like Shankar-Jaikishan, Laxmikant-Pyarelal (who also did her home productions even

after she quit acting), S.D. Burman, Naushad, Salil Chowdhury, Kalyanji-Anandji, Jaidev, Ravi, O.P. Nayyar and Madan Mohan. Her track-record made her mentor feel that she had a great musical

acumen and he would actually summon her to gauge the tunes made by another of his protÃ©gÃ©s, composer Usha Khanna!


Sadhana's love life began with her debut film and her first director R.K. Nayyar fell in love with her. Sadhana remembers that her parents objected as she was under-age. Years later, Raj Kapoor

wanted to watch one of Sadhana's mega-hits, Mere Mehboob and asked Nayyar, who had been his assistant, if he could manage a special screening. That is how they met again. "We were back to

where we had left off. This time my parents supported me, and in 1966, we got married," the actress had said.


The actress was refreshingly candid about how she became a fashion icon. "My forehead was very broad and that stood out when a new camera had arrived at S.Mukerji's office and they had taken a lot

of photographs of everyone," she had recalled. Instead of the conventional way out of sticking a patch of hair on the forehead, her husband mentioned that Audrey Hepburn had the same problem and

so she would cut her hair in a fringe. "I did that and to date it is known as the 'Sadhana cut'!"


Sadhana was five-feet-seven, and also could not afford to wear heels, she laughs. "Once Raj (Khosla)- ji was shocked when he told me to remove my heels in a sequence and I told him that I

wasn't wearing any! With heels and the kind of bouffant that was the trend then, I would have been six feet plus!"


The actress also made the churidar-kurta a rage. "In Waqt, it came across as a modern style that was not necessarily a Muslim outfit," she recalls.


The actress remains matter-of-fact about her beauty, which also made her quit when she was at the top. "I know I looked lovely. So I avoid being photographed now. I could have kept going, doing

bhabhi and motherly roles, but if you check, you will find that I am the only actress of my generation who never made a comeback."


As the cliche goes, legends go down, but, only in history.