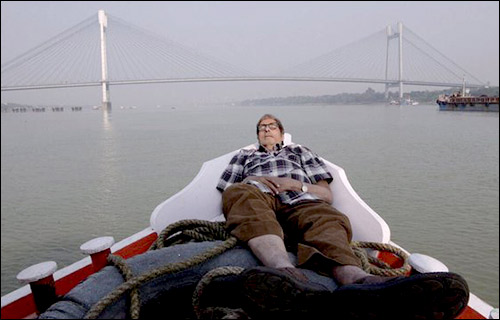 Looks like megastar Amitabh Bachchan has fallen love with the streets of Kolkata. Almost a year later, the veteran actor has once again taken off to the Bengal capital to shoot for yet another film, Te3N. From what we hear, the Ribhu Dasgupta directorial will once again see Amitabh Bachchan in an unconventional role and the actor has been sharing various pictures from the sets of the film.


Amitabh Bachchan recently shared pictures of him riding a 'toto' rickshaw on the streets of Kolkata on Twitter as he is surrounded by a huge crowd who are eagerly waiting to catch a glimpse of the actor. He posted them saying, "Kabhi cycle, kabhi phatphatiya toh kabhi 'toe-toe' .." This comes after the actor was seen riding a scooter around Kolkata for the same film. Moreover, he was also seen taking a tour of the city in a bicycle in his last film Piku (starring Deepika Padukone). It seems Big B just doesn't seem to be getting enough of the city.

Also, the producer of the film, filmmaker Sujoy Ghosh too took to Twitter to share an image of Big B where the latter is seen resting on a boat with the backdrop of the famous Howrah Bridge.


Te3N also stars Vidya Balan in the role of a cop along with Nawazuddin Siddiqui playing one of the protagonists.