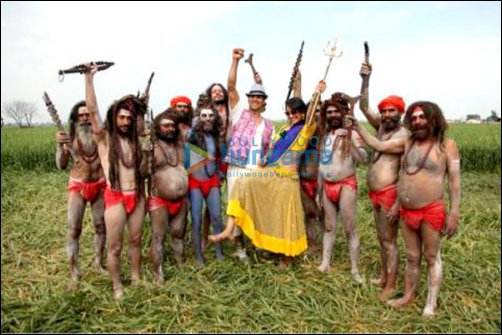 The grand festival of Mahashivratri was extra special for Shirish Kunder and Farah Khan this year. The reason? Well, Farah was busy shooting a song sequence for Joker in Chandigarh on the eve of Mahashivratri, when the crew spotted a whole bunch of saadhus passing nearby, as there was a Pooja that was to be conducted on the festival day.

That's when the aptly active brains of Farah and Akshay Kumar (who plays the lead in the film) got an idea of 'casting' the saadhus in their film. The initially reluctant saadhus gave in to the requests of the Joker's crew members and agreed to do a 'cameo' in the film. The director Shirish Kunder loved the shot so much that he decided to retain it in the film.

Shirish says that it was quite a spontaneous decision to feature the saadhus in the film. Some cameo that is.