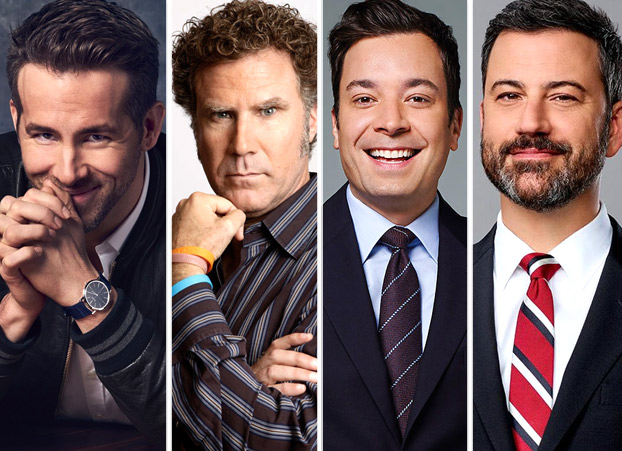 On Wednesday night, audiences of Jimmy Kimmel Live and The Tonight Show Starring Jimmy Fallon as well as the hosts themselves got a surprise when Ryan Reynolds and Will Ferrell swapped their talk show appearances at the last minute. Kimmel was supposed to be interviewing Reynolds and instead got Ferrell, and Fallon was supposed to be introducing Ferrell and instead got Reynolds.

Both actors were dressed as if they'd literally walked in for the interview from the streets (with Ferrell in Star Wars pajama pants) which Reynolds claimed was the reason for the last-minute switch Since Reynolds lives in New York and Ferrell lives in L.A., the friends thought it would be an easy way for each other to "save the day." Reynolds told Fallon, "Will called. Said he was running a little late. Asked me if I would jump in for him”, adding that Ferrell would be arriving "half past never."

On the other hand, Ferrell told Kimmel, "Ryan couldn't make it. I got a text from him that said he was running late, which usually means he's not going to show up... he just asked if I would fill in so I just rolled down the hill."

The switch was both a clever way to shake up a press tour for the actors' current projects, as well as give a bit of early press to Spirited, the upcoming holiday movie musical they both star in. It's also not the first time Ferrell has "stolen" Reynolds moment while filming Spirited, Ferrell had some fun crashing Reynold's TikTok performance of Mika's Grace Kelly cover.

Reynolds attempted to explain the plot of Ferrell’s upcoming The Shrink Next Door. As for Ryan Reynolds’ Red Notice, Ferrell admitted he "hadn't seen a tick of it" but he still succeeded in plugging it pretty well.