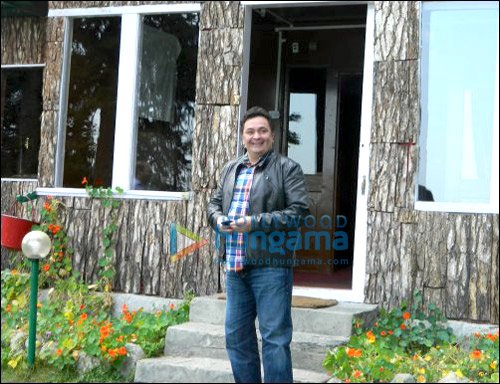 When recently Rishi Kapoor visited Kashmir after two decades for director Imtiaz Ali's brother's wedding, he decided to revisit all the places in Kashmir he had shot for in his first film as leading man.


Says Rishi, "I was in Kashmir after so long. On an impulse, I decided to go back to all the places where my father (Raj Kapoor) had shot my first film Bobby with me and Dimple. Believe me, I hate these nostalgic trips. Peeche dekhne ka waqt kahan milta hai? But this was special."


Rishi visited all the famous places that had given Bobby its timeless romantic fervour.


"I also went to the place where we shot 'Chabhi Kho Jaye'. It was as though time had frozen over there. The same cottage, the same greenery, the same flowers in bloom, and even the colours of the flowers were exactly the same. The outdoor portion (not the interiors they were done at the RK Studios on a set) for the song was filmed here 39 years back."

Getting sentimental, Rishi says, "I visited after 23 years. Ranbir has been to Kashmir when he was a baby. I thought these type of situations only appeared in films where a man connects to his past but see and beholdâ€¦ this is for real! This is Gulmarg, this is Kashmir, the place that made me whatever I am. Ever and ever in love and indebted to Kashmir. So happy Ranbir too shot in Kashmir for Rockstar! "


Recalling his family's long association with Kashmir, Rishi says, "My grandfather Prithiviraj Kapoor had visited Kashmir with his theatre group for two months in the 1940s. Do you know, my father Raj Kapoor was the first filmmaker to shoot in Kashmir? He shot Barsaat in the Valley. He couldn't afford to take the whole crew, so he went with just the cameraman Jal Mistry. Then of course I don't have to tell you about Mr. Shammi Kapoor and Mr. Shashi Kapoor's association with Kashmir. I shot 15 films in Kashmir including my first film as a hero. Now I am proud to say my son Ranbir has also shot in the Valley for Rockstar."


"Bobby was special. It remains special for future generations. But I can't bear to watch myself in it. I was so young and so bloody thin, yaar! It's embarrassing to compare what I've become now with what I used to be back then. Whenever Bobby comes on satellite TV, I quickly switch off or move out of the room. That boy in Bobby is not me."