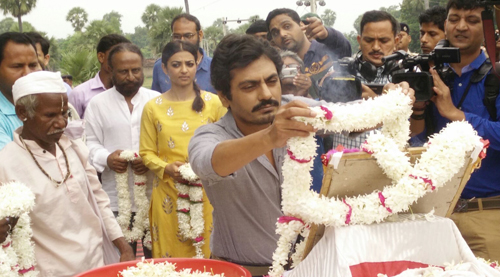 "Nawazuddin has delivered a heart winning performance in Manjhi-The Mountain Man. It's a great performance. It's one of the finest performances on Indian screen ever.

Awards come and go but this performance will be remembered for a long time," said Ketan Mehta in a Bollywood Hungama exclusive video interview with me at the actual location where Dashrath

Manjhi broke a mountain in Gehlaur village, near Gaya in Bihar. Mehta along with wife Deepa Sahi, Nawazuddin Siddiqui and Radhika Apte visited Gehlaur to pay their homage to Dashrath Manjhi on his


Gehlaur village is around 30 kms from Gaya district in Bihar. Gaya is a holy place for Hindus and Bodh Gaya is the most important pilgrimage for Buddhists since it has the historic Maha Bodhi

Temple built by Ashoka over 2500 years back. Lord Buddha attained salvation under the Lumbini tree at the exact location where the temple stands today. And such an auspicious place as this, in its

neighbourhood, witnessed a historic feat achieved by a frail man called Dashrath Manjhi. His wife met with an accident and because of the tall mountain, the long winding road to the nearest

hospital was too long leading to the death of his wife. Manjhi toiled hard for 22 years from 1960-82 and created a path that will prove beneficial for generations to come. As I reached the actual

location I ended up saluting the indomitable spirit of the mountain man as I saw motor cycles, cyclists and people leisurely walking across the path created by him. While speaking to various people

I came to know that Dashrath Manjhi truly had a never-say-die spirit. He had actually walked from Gehlaur to Delhi (on the railway tracks) in an attempt to meet the then Prime Minister Mrs Indira

Gandhi to seek help in his mammoth task. He didn't have the money to buy a railway ticket and even after reaching Delhi he wasn't allowed to meet the Prime Minister. Today Dashrath Manjhi is the

pride of Bihar. Chief Minister Nitish Kumar at a function in Patna yesterday met the entire team of Manjhi-The Mountain Man and wished them luck. Bihar government has announced the tax free

status to the film.


"World should change its perception of what they think is Indian cinema or what Indian cinema should be. They are constantly searching for their dysfunctional family stories in India whereas the

most inspiring film in Earth comes from Bihar which is unfortunately famous for its violence," said Deepa Sahi, producer of the film when I asked her if Manjhi-The Mountain Man ought to get

a proper international release as a film like this may find acceptance anywhere in the world.


Rudrarup Datta, Senior Vice President, Viacom 18 Motion Pictures informed me that they are aiming for the release of the film in around 500 screens in India and hoping to increase the number as the

days go by. He also said that they are planning for a proper international release as well.

The romance between Nawazuddin and Radhika Apte in the film is very crucial to making the story entertaining and absorbing. Radhika on her part admitted that she has never been wooed like this both

in real or reel life. There's a love making scene in mud between the two. "We were completely covered in mud, it's a beautiful scene, most sensual," Radhika said. Nawaz, in a lighter vein said that

he used to request Radhika to be present on the sets even when she didn't have any scenes as it inspired him in breaking the stones. I've known Nawazuddin since a long time and have interacted with

him for all his films in the last few years but I've never seen him so passionately involved in any of his previous films. He excitedly told me about the achievements of Dashrath Manjhi. He seemed

more enamoured with the milestones of Manjhi instead of
showing off his considerable acting chops. Nawaz along with Ketan Mehta went to Dashrath Manjhi's house. He informed me that while preparing for his role he had stayed in this house for several

days ate with the family and tried to imbibe the finer nuances.


A local from the area, Vardaraj along with Shahzad has written the dialogues of the film. A local journalist Ashok Kumar Anj (who also finds reference in the movie promos and the film in totality)

made immense contribution in researching for the film, how Dashrath Manjhi walked, talked or conducted himself. Both admitted that they drew inspiration from Dashrath's 'junoon' while working on

the film. The movie producers have given a substantial financial assistance to Dashrath Manjhi's family.


I asked Ketan Mehta that even though Oscars are over hyped, but still, does he think that 'Manjhi-The Mountain Man' ought to be India's entry to the Oscars? "Oscars, Cannes are far from my head.

At this point of time, all I am hoping for is that the film should go straight to audience's heart," Mehta said.


It was around 11 am when we wrapped up everything. It was extremely hot and humid even though the scenery around was very pleasant with mountains, trees, a quaint river and a cluster of green trees

at a distance. Once again I ended up applauding Dashrath Manjhi's magnificent spirit who must have shed gallons of sweat in achieving the most impossible task...humbling an arrogant mountain and

Radhika Apte reminisces her night at the…

Radhika Apte expresses her grief on the…

Nawazuddin Siddiqui expresses grief on the…