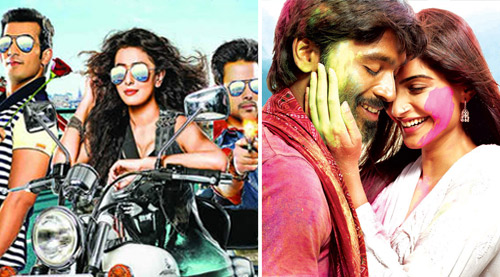 Sounds familiar? Of course, since this is the story of Dhanush, Sonam Kapoor and Abhay Deol starrer Raanjhanaa, which was directed by Aanand L. Rai. Well, explore the surface of upcoming film Direct Ishq and one can sense a similar stage and setting.

"In Rajiv S. Ruia directed Direct Ishq too, the setting is that of Banaras. Rajniesh Duggall falls in love with local girl Nidhi Subbaiah. She treats him as a good friend. Then another boy comes into picture in the form of Arjun Bijalani. This is what leads to a love triangle of sorts. If this isn't similar to Raanjhanaa, then what else," questions an observer.

"Well, a lot," pronto says a source attached to the film, "Just on the basis of Banaras and the three protagonists, you can't say that Direct Ishq is on the same lines as Raanjhanaa. Puhleeze, the core plot points of Direct Ishq is completely different from Raanjhanaa. The two have nothing to do with each other. In Direct Ishq, Nidhi plays a tomboy girl who is happy in her own world as a singer. While Rajniesh plays a student leader, Arjun comes from an event management background. How the two boys come together to lend strength to Nidhi, with a budding romance playing alongside, is what the film is about."

That said, considering the fact that Dhanush had played a ruffian in Raanjhanaa while Abhay had played a simpleton in the film, one is led to an assumption that the Varanasi backdrop would result in similar characterization for Rajniesh and Arjun as well.

"Arrey nahi, aisa kuch nahi hai," says Rajniesh after a hearty laugh, "I had a blast playing this Banarasi launda jo maarta pehle hai aur baat baat mein karta hai. My agenda is to help Nidhi since in my heart I am a leader who wants to solve everyone's problems. On the other hand Arjun's agenda is to help Nidhi realize that she can be a rock-star, and help her in that endeavor."

He further adds that at the core of it all, Direct Ishq is a love story."Once Bicky Shukla sees Dolly Pandey, the entire equation changes. It is indeed a love story of a different kind," he adds. We look forward to that.