Priyanka Chopra, who has been travelling and sharing some fun moments with Nick Jonas and her new family, recently decided to attend a fashion gala held in the U.S. The magazine The Daily Front Row hosted the 6th Annual Fashion Media Awards in Manhattan, a couple of days ago and the event was graced by some top models, celebrities and media personalities. It was also attended by Priyanka Chopra sans her fiancé Nick Jonas. However, accompanying the actress was none other than her mother and business partner Madhu Chopra. 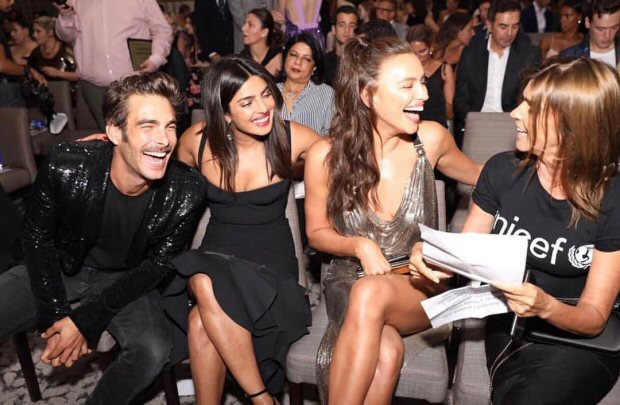 Not only did Priyanka Chopra planned to catch up with her Hollywood friends and was also seen sharing some good memories with them. The actress, in fact, posted this picture with model Jon Kortajarena, Russian supermodel Irina Shayak and French fashion editor Carine Roitfield. The picture saw all the three of them sharing a hearty laugh and it was also shared by Priyanka on her Instagram page, where she had captioned the same as ‘fun times’.

The picture also had Madhu Chopra, who was seen sitting in the seating behind Priyanka Chopra and her gang. It seems that Mrs. Chopra wanted the gang to have their own share of fun.

In fact, earlier, when Priyanka Chopra posted about her famjam moment when she went out with her fiancé Nick Jonas, his brother Joe Jonas and the latter’s fiancée Sophie Turner, the Bollywood actress also posted about her mother being around. Looks like the mama Chopra has taken off some time off to stay with her daughter after the latter got engaged last month.

Coming to the work front, Priyanka Chopra recently announced the wrap up of the show Quantico. She also stated on social media that her next film with Liam Hemsworth, Isn’t it Romantic? too has been completed. On the Bollywood front, she will be next seen in The Sky Is Pink which also stars Farhan Akhtar and Zaira Wasim.