It is a known fact that ‘wink’ girl Priya Prakash Varrier became an internet sensation over night with the song video of one of her films, Oru Adaar Love going viral. Now, she is back in news for her next Sridevi Bungalow which is facing ample controversies over its uncanny resemblance with the sad demise of veteran actress Sridevi. While the young actress is taking all of it in her stride and dealing with controversies, she is also enjoying the promotional activities during which she got an opportunity to meet some big stars like Ranveer Singh, Varun Dhawan, Katrina Kaif, Vicky Kaushal and the recent addition to the list is Malayalam superstar Mohanlal. 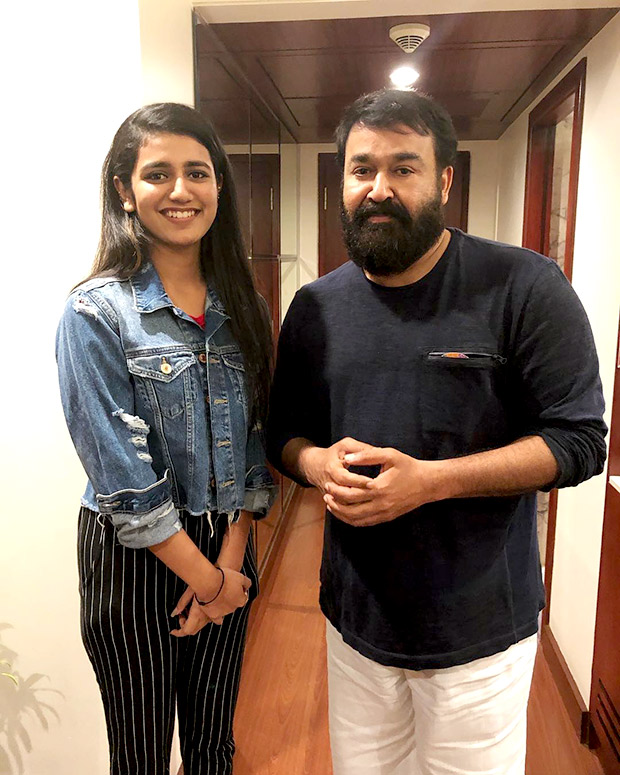 The social media accounts of actress Priya Prakash Varrier definitely seem to be boasting about her fan girl moments. And now she has found an addition that she will treasure and cherish for life since it is a photo with one of the most undisputable stars of the Malayalam film industry. Considering that Priya is herself a part of the Mollywood world, she had a complete fan girl moment when she got to meet Mohanlal. What was even more exciting? That she could interact with him and also seek his blessings for future endeavors.

Gushing about the meeting, Priya Prakash Varrier has described about her experience of interacting with Mohanlal in her Instagram post. Sharing this picture she said, “Is this even real?!Been pinching myself since the day this happened?? I consider myself the luckiest to have met this legend and spent a few minutes with him. I am humbled that I got to touch his feet and seek his blessings for all my future endeavours! Padmabhushan Padmasri Bharat Dr. lieutenant colonel @mohanlal sir aka nammade swantham lalettan.”

Priya Prakash Varrier is gearing up for the release of Sridevi Bungalow in which she plays a lonely actress who succumbs to depression and commits suicide. The film is directed by Prasanth Mambully.