It was truly an unexpected and most iconic moment that transpired on the sets of the superhero drama Brahmastra. Ranbir Kapoor and Alia Bhatt are currently in Bulgaria where they are gearing up to complete the final schedule of the Karan Johar production. And they were definitely thrilled to welcome not only our honourable President, Ram Nath Govind but also the President of Bulgaria, Rumen Radev. 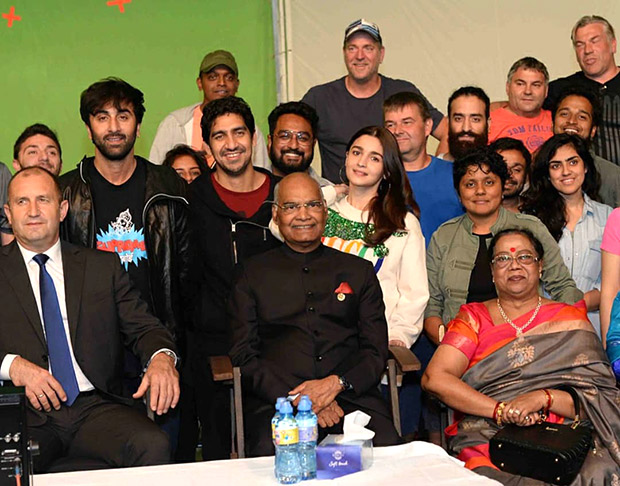 Dharma Productions has shared pictures of the special visit made by both Presidents to the sets of Brahmastra in Sofia on social networking sites. In fact, they have also expressed their happiness over the moment. Also, the honourable President of India, Ram Nath Govind too has shared the pictures on the same social media platform.

#PresidentKovind and President Radev dropped in at the studio in Sofia where the Hindi film Brahmastra is being made. The Presidents met the Indo-Bulgarian crew and chatted about cinema as a business and cultural link between the two countries pic.twitter.com/8ApZq1gEJA

Coming to their visit, Marijke Desouza, who is considered to be one of the producers of the film, stated in reports about the meeting with both the Presidents. She stated that they arrived at around 9.30 pm after the state dinner and also added about how President of Bulgaria, Rumen Radev is a huge fan of Bollywood films. Not just that, she also believes that our President too is quite well versed about films.

Marijke also went on to speak about the 30 minute interaction that happened with them where they discussed about how the movies are made in India and how the relaxed conversation was very fruitful. After this session of interaction and Q&A, Desouza also believes that there can be many such successful collaboration between both the countries in the near future.

Furthermore, she also elaborated on how the schedule in Bulgaria is going to be action packed for the next 10 days and that they will be using what is referred to as, motion play. In fact, it seems that the President too got a glimpse of the final prep that they were doing for the day which involved some stunts with equipment. Marijke also asserted that they were prepping for the action with ample security.

Let us remind you that the crew used for this superhero trilogy is actually a mix of Indians and Bulgarians. Directed by Ayan Mukerji, Brahmastra also stars Amitabh Bachchan, Dimple Kapadia, Nagarjuna, Mouni Roy amongst others and is slated to release on August 15.