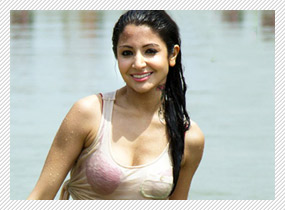 Let's begin with a cliche question - 'How many youngsters can actually dream of making a foothold into Bollywood without a filmy family, sugar daddy, Godfather or an influential boyfriend to bank upon?' The answer is obvious - 'Hardly any'. Pick any of the top leading ladies in the industry and she would basically have someone from the aforementioned categories to bank upon. Of course as always, talent plays an important role in ensuring that the leading lady manages to maintain a certain position in Bollywood. However it is still quite a journey for an absolute outsider to keep her head high in the world of glitz and glamour.


Well, Anushka Sharma has managed that with aplomb, and how. With a good success rate and her upcoming films pretty much ensuring that the hit record would be well maintained, Anushka is enjoying a steady journey so far that only has a potential to further soar.


Here is presenting Part I of the Exclusive Feature


Was it really a dream beginning for Anushka Sharma when she played an unhappy wife of none less than Shah Rukh Khan in Rab Ne Bana Di Jodi? From the commerce perspective, there were so many factors that were actually pegging the film (as well as Anushka's debut) back. First and foremost Shah Rukh Khan wasn't cast in his quintessential lover boy avtar and was in fact playing a middle aged man who hardly had any charm whatsoever to have his way with women. Then Anushka herself was playing a simple small town girl and was clad in suit-salwar for most part of the film. Despite Chopras at the helm of affairs there were no chiffon sarees either while even though she was playing a married woman; there was no real moment of romance that she indulged herself in. To put it simply, this was an experimental film that could have gone either way.


However to her luck, the film turned out to be huge, and how. A super hit by all means and netting close to Rs. 80 crores in those times (remember, this was four years back) when such moolah was nothing less than a dream, Rab Ne Bana Di Jodi was a big money spinner. Also, one can't forget the fact that the film was released in the aftermath of 26/11 attacks which means a certain segment of audience was still happy checking out the film on pirated DVDs at home instead of risking a visit to theatres. Still, despite all odds, the film did tremendously at the box office, hence turning out to be one of the biggest successes ever for a newcomer.

Other than the fact that the film did well commercially, even critically Shah Rukh Khan and Anushka Sharma got a good response. Especially for Anushka this was a great achievement because for someone from a non-filmy background and zero acting base, she managed to impress one and all, hence silencing cynics who were wondering if she was indeed the right choice for the role. As it turned out, she indeed fitted into the scheme of things perfectly and showcased a great account of herself, hence ensuring that she was certainly there to stay.


As it happens with majority of actors and technicians hired by Yash Raj Films, even Anushka Sharma found herself in a three films non-exclusive contract with Yash Raj Films. This means that though she could work in movies outside the production house as well, there were at least three assignments for which she was bound by a contract. Of course Anushka didn't mind that because the next film that came her way was Badmaash Company.


This time around she had someone belonging to her own age group in the film. Shahid Kapoor was hot-n-happening after Jab We Met and Kismat Konnection and it was just apt that with Anushka in tow, this Badmaash Company indeed went ahead and rocked the show. The film released close to a year and a half after Rab Ne Bana Di Jodi and though quite a few felt that this was a break which was indeed long enough for Anushka, the pretty girl didn't mind that as she was assured that there would be better things coming her way soon.


Please visit this space for Part 2 of the feature