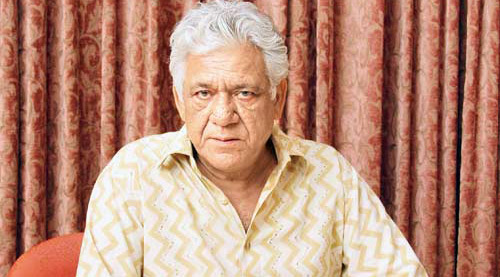 Om Puri who feels very strongly on the issue of farmers' suicide will be seen in a film Project Marathwadathis Friday where Om plays a financially distressed farmer who threatens to immolate himself in front of the chief minister's office after financial assistance is denied to him.

Om feels the politicians of the country must watch films that address themselves to important issues. "Look at the financial risk taken by the makers of Project Marthwada. They know it doesn't contain commercial ingredients. Still they chose to back the project. Politicians should at least take the trouble to watch such films, and help the project if they feel it's worth it."

The actor feels the issue farmers' suicide is not being tackled seriously enough. "We do not realize how much the farmer contributes to our lives. When I was a child our country had to import food grains from the West. Today we are self-sufficient in food grains, all thanks our farmers. And yet we allow them and their families to starve. Shame! The soldiers and the farmers toil endlessly so that we can exist peacefully. Lal Bahadur Shastri realized this through his slogan Jai Jawaan Jai Kissan."

Om felt impelled to work in Project Marathwada as its makers believe in putting across the plight of farmers.

Says Om, "To address the issue of farmers we need to address the problem of droughts. To make sure a river doesn't dry up we need to find a way to connect all the rivers. I know that's a distant dream right now. But it is the only way to ensure farmers don't reach that breaking point when they need to end their lives. They need to have access to the water from all our rivers."

Om is all praise for fellow-actor Nana Patekar who is fiercely commit teed to eradicating farmers' suicide. "We speak about this quite often. This film is in many ways close to Nana's heart. The problem of bankrupt farmers should concern not just some of us but the entire nation. We hope to create some awareness of the issue through Project Marathwada."

The committed actor hopes the film gets an audience. "The makers should at least get back their money. That is the only way filmmakers would be encouraged to make films on issues that plague our society."