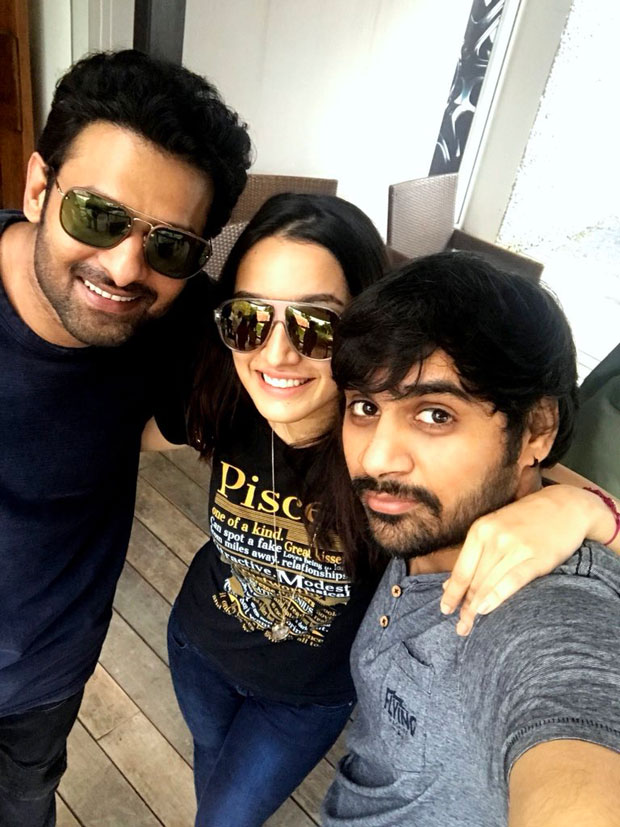 It is a well-known fact that Shraddha Kapoor is striving hard to keep up with her hectic schedule which also includes her South debut Saaho. The actress, who will be paired opposite Baahubali star Prabhas, was recently seen bonding with her co-star as well as the director of the film Sujeeth.

With Prabhas recently turning a year older on October 23, the makers of Saaho decided to give his fans a glimpse of his forthcoming film and released the first poster of the trilingual. The film, which is said to be a sleek action thriller, has Shraddha Kapoor playing Prabhas’ leading lady.

Filmmaker Sujeeth who seems to be super excited about the way his film is shaping decided to share some more love on social media wherein he posted this picture with his leads – Prabhas and Shraddha. Furthermore, he also added birthday wishes to his hero in the same post. Saying, “You guys are amazing @ShraddhaKapoor #HBDDaarlingPrabhas #SaahoFirstlook #backtowork,” he posted this picture as he is seen posing with the two actors.

Talking about Saaho, the film also features a few actors from the Bollywood fraternity like Neil Nitin Mukesh who plays the antagonist, Mandira Bedi in a grey role as well as Tinu Anand. The film that is being made on a whopping budget of Rs. 150 crore will be made in three languages which includes Tamil, Telugu and Hindi. Post the stupendous success of Baahubali, Prabhas decided to make his foray into Bollywood with this film.