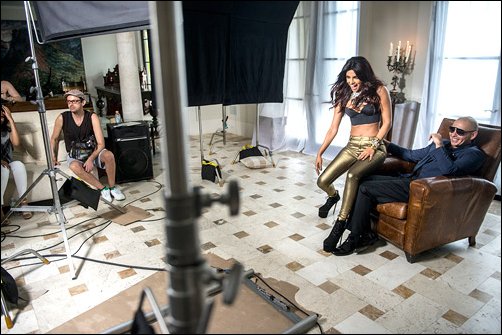 After the success of her first single 'In My City', Priyanka Chopra is all set for another blast with her second single called 'Exotic' featuring the Hollywood rapper Pitbull. The video which is going to debut on July 1 will be PC's first widely-released single in the U.S. with a second coming later this summer. The 30-year old superstar shot 'Exotic' in South Beach, Florida to infuse it with some heat and the video being dance-heavy; she added a desi tadka to it. PC displays three different yet surely exotic looks in the video!

While the first look consists of a sparkling illusion Jovani sequined body-con with cage Altuzarra boots and tousled hair, the second one has a tribal touch to it with a multicolour embellished blazer from the Blonds, fall 2012 collection. The smokey eye and a relaxed up do are great finishing's to it. The pop star donned a black bustier, gold denim pants with heavy jewelry and uniquely designed black pumps for the third one.

Priyanka considers Pitbull as the 'perfect flavor' for 'Exotic'. Not only is he amazingly supportive to Ms. Chopra but also gives her pretty good advices, when it comes to marketing her music. The B-town babe got her make-up for the video done by makeup artist, Robert Greene. And she loves to keep the monotony of loud heavy looks donning them one after the other.