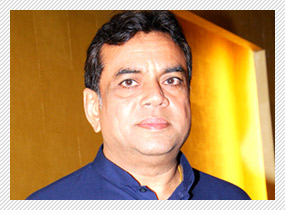 Reveals Paresh, "We haven't really decided what Akshay and I will co-produce next. But we'll definitely work together again. He has been a treat to work with. I have my production house Playtime Creations. I feel comfortable working with Akshay. As an actor I have to create opportunities of my own. Akshay is a good ally in this endeavour."

While Paresh declines from divulging more details about their next co-production, we understand from reliable sources that Akshay Kumar wishes to do an adaptation of another long-running Paresh play Dear Father to the screen. Apparently both Akshay and Paresh were very close to their respective fathers and empathize closely with the content of the play.

Even as a crescendo of voices rose in protest against the anti-ritualistic attack on religion in Umesh Shukla's OMG Oh My God! , the film's super-talented leading man Paresh Rawal is unfazed.

The incredibly versatile actor who is a treat to watch in his agnostic role says, "There was no fear of backlash at all. We were always very sure of what we were saying and doing on ritualistic religion and the way it controls the life of the common man. I had performed the same story in play form in front of a 1000-strong audience for 150 shows in Gujarati and Hindi repeatedly. The play has also been performed in Punjabi and English. We never had any protests. A live audience could've easily expressed its displeasure at our ideas in the play. Not once did we face any protest. So I knew we were on stable ground with the film. There was no one throwing shoes in any of the shows. Audiences from the older and younger generations have appreciated the idea beyond the play."

Paresh is unfazed by the spate of protests against the film. "Even in Punjab we've been able to release the film almost everywhere. The protestors are seeing and hearing what they want to. And if we are daunted by protests we'd never be able to extend the reach and impact of the visual medium, be it theatre, television or cinema."

Paresh is all for the thought that religion is now being merchandized in our country. "I believe in God. But the costly ways recommended to reach him are wrong. Just who benefits from all the showy rituals, I don't know."

Paresh is more concerned by the fact that the film has somewhere deviated from the play. "To make the film more mass-oriented we somewhere diluted the original play. That was bound to be. In the play audiences were happy to see me on stage for two hours. In the film the audience needed more incentives."

It is rumoured that the film's co-producer Akshay Kumar who has nursed a life-long ambition for playing God pushed his way into the film.

Paresh gives Akshay a clean chit. "It was really sporting of him to agree to feature in a film where a character actor like me played the lead. He believed in the theme."

The critics have loved Paresh's film. "I am not being modest when I say I don't see producers putting a 50-crore film on my shoulder. It may happen in the future. One never knows," says Paresh.