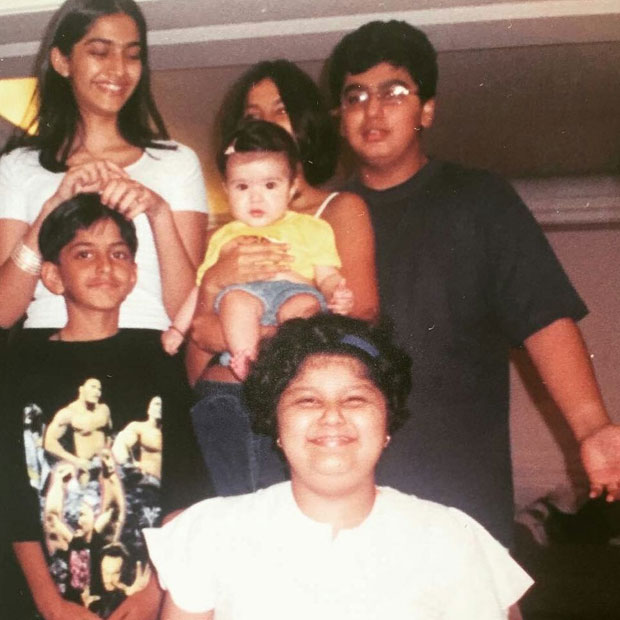 Hailing from a filmy family, cousins Sonam Kapoor and Arjun Kapoor continue to share a great camaraderie even today. Well, their off screen bonding is quite visible during their interviews. What more, their posts on social media is a proof of how they have retained their relation for years now and their pictures often take us through a nostalgic trip.

Arjun Kapoor, who is riding high on the success of his last hit Mubarakan, recently was seen reminiscing about his childhood days on social media. He posted this picture of him with his real life sibling Anshula Kapoor, cousins Sonam Kapoor, Rhea Kapoor, Harshvardhan Kapoor and their youngest cousin Shanaya Kapoor [for the uninitiated, she is the daughter of Sanjay and Maheep Kapoor].

Sharing it on Instagram, he further added, “Dude, like who are these people ??? @sonamkapoor @rheakapoor @anshulakapoor @harshvardhankapoor @shanayakapoor02.” It’s a well-known fact that Arjun as a teenager was quite overweight and he has reduced several pounds before he made it big in Bollywood. May be that’s what he was referring to when he pretended to not recognize all the kids in the photograph.

As for his forthcoming projects, Arjun Kapoor will next be seen in two films with Parineeti Chopra – Sandeep And Pinky Faraar as well as Namastey Canada. He has also reportedly signed for the film Farzi which will have him opposite Kriti Sanon.