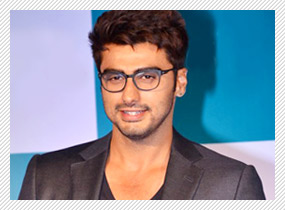 After playing a rough character in each of his first three films (Ishaqzaade, Aurangzeb, Gunday), Arjun Kapoor is sobering down with 2 States. As an urban boy next door with a simple persona to him, the youngster is aiming at showcasing an altogether different side of him with the Sajid Nadiadwala-Karan Johar production.

Life must be good with Gunday kicking off the year in a style, right?

Of course. The appreciation that I got for the film has been a great high. After the film's release I was traveling to London and people were calling me Bala. I guess all of that is possible only when people connect with you. To witness audience being astounded with your film is a very gratifying feeling. Now that 2 States is coming, it is an altogether different journey altogether.

Isn't it a relief to play a sober boy after Gunday?

Well, I shot for 2 States and Gunday simultaneously so there was no relief per se as I was living in two different worlds. I was fluctuating between Bala and Krish. I was always aware that I wanted to do a film like 2 States which wasn't one of those small town front-footed aggressive affairs. It was an exciting thing for me as I could relate to this character which is not as volatile and violent as my earlier portrayals.

2 States obviously comes across as a much more realistic affair when compared to the larger-than-life world of Gunday.

Yes, the film has a very real setting. It is a modern day take on what marriage still means in our country. It is more than just a romcom; it is a love story between two families. Generally in Hindi films, maa-baap pyaar ke dushman hote hain, shaadi nahi karne dete hain. In 2 States there is nothing like that. They love us kids and want us to be happy with choice of our partners. The film begins where most love stories ends. It is a lot more emotional stuff on display.

The film has Amrita Singh playing this protective and proud mother who feels her son is the best. Was this the way your mother also treated you with a lot of pride?

While Amrita was sporting enough to do what the director wanted, as for my mother she was a very soft person. She allowed me to do what I wanted. She wasn't an interfering sort. She had a lot of trust in me.

In your real life did you ever found yourself into a relationship where you felt that it was an impossible situation to come out of?

That has never happened! My family is quite liberal that way. There has never been any major concern. They have enough faith and belief in me that I am making decent choices. I am sure that whichever life partner I decide to choose for me, they would be okay with that.

Shaheer Sheikh declares the name of her baby…

Kishwer Merchant and Suyyash Rai get their…