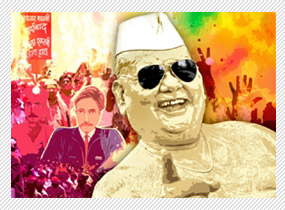 Routinely, we love to sweep the truth about Hindu-Muslim relations under the carpet. Or simply sugar-coat it to make the actual volume of mutual distrust and animosity palatable to a nation steeped

in escapism and self-delusion.

Dekh Tamasha Dekh (DTD) directed by theatre legend Feroz Abbas Khan (of Tumhari Amrita fame) is a jolting wake-up call for a nation swept into a slumberous silence by the status quo.

Put simply, we don't want to face the reality about the friction that simmers just under the surface among the two communities. DTD is perhaps the first Hindi film which ventures into the vista of

other with the harshest of epithets.

This is not a film about niceties. Director Feroz Khan who comes to us with a formidable theatre background doesn't allow the narrative to nibble daintily at corrosive socio-political matters. Rather,

the narrative chews industriously on the political issues. By using the twin missiles of satire and irony Khan brings into a play a kind of pinned-down provocativeness into the plot whereby the

characters become real and representational at the same time.

Miraculously the film is both a parable and a topical comment on communal relations. This is a film that takes burning headlines and converts them into slices of incriminating illustration on Man and

the beast within. The smell of authenticity pervades the destiny of the political-driven nefariously motivated characters.

This is literary cinema. The characters and their situations unfold like chapters from an epic novel. This is Govind Nihalani's Tamas without the recognizable punctuation marks. The director authors

the characters' destiny in scenes that are written like chapters. Amazingly, the context of the scenes are explained to the audience without the crutches of a voice-over. Take that lengthy but

both the canine and the editor at the same time. Elsewhere a wife and mother (Tanvi Azmi, eloquence personified) grieves for her dead husband while women of the neighbourhood join in to while

away their time while waiting for the taps to supply water.

The cauldron of simmering ideas on the polemics of discontent is brought to boiling point in the narrative. As danga-phasaad become a nanga faÃ§ade of organized miscreancy, the director steps back

to let the characters assume a life of their own. What we see is an unadorned dance of demoniacal self-gratification mottled by sudden spates of innocence and grace.

A mother-daughter sequence towards the end featuring the lyrical Tanve Azmi and her screen-daughter (Apoorva Arora) reminds us that political cinema need not be dry and emotion-less. As the

characters shed their humanism the plot gathers a sense of tragic redemption that we sense waiting around the corner.

It's the kingdom of the quirky and the tragic. Feroz Khan portrays a world that is both bizarre and poignant. Groups of militant religious fundamentalists clash over a corpse using the vilest of insults to

strike one another's ideological arguments down. A police thana goes in a tizzy as their resident bitch has been impregnated by a street dog. A rabid mullah (Sudhir Pandey , giving a slyly cunning

performance) denounces soft-liners and urges 'true' Muslims to fob off the danger to their religion. An intellectual author sits literally deafened (his hearing aid off his eardrums) as rioters shed blood

right at his doorstep. A moderate Muslim journalist gets shooed out of town by sneering rioting hardliners who then burn down his house. A rational non-partisan cop (Vinay Jain) musters courage to

stop communal mayhem in town. A young innocent Hindu-Muslim couple tries desperately to cling to their precious little paradise as everything around them goes up in flames. A mother grieves for a

son who has fled from the scene of communal violence....

DTD is a work of many contradictory forces pulling and tugging at the plot as it stretches out in a saga of valour and vitality, caprice and cowardice. Remarkably, the narrative makes no use of

extraneous artificial sounds to create a heightened drama. The natural sounds that pervade the soundtrack add to an eerie sense of a world of fearsome anxieties. Indeed sound designer Baylon

Fonseca is one of the heroes of this film. Sreekar Prasad edits the material to retain the rawness of mood without sacrificing the smoothness of narration. Hemant Chaturvedi's cinematography

sweeps across the town prowling to peep into homes and hearts that are aflame with an anxious identity crisis.

Rarely does cinema take us so deep into the socio-political dynamics of communal disharmony. Honest to the core, brutal, ironical and disturbing, Feroz Abbas Khan's world of Hindu-Muslim strife is

cluttered with a compelling tension that erupts into welters of well-aimed social comment. What we come away with is a film committed to mirroring the murk and mirth of organized religion and a

disorganized system of governance which plays a game of appeasement with religious communities, setting off one group of people against another.

In this scenario of impending catastrophe a cop suddenly discovers unplumbed depths of heroism and tells the flag-waving saffron and green brigades to back off. There is just that little space where

we pause for applause. Stark, real, disturbing, ironical, funny and gripping Dekh Tamasha Dekh is the film Govind Nihalani would have made if only he had the freedom to call a spade a spade.

Not all the truth of Feroz Khan's cinema is palatable or even fully intelligible. But there is little here that doesn't provide food for thought.

This is a film that addresses itself to ideas and thoughts buried away from human consideration. We don't want to consider to what depth human nature can fall if pushed against a dirty wall. To record

the dirt on the wall and the blood on the floor with such clarity and honesty is not within the creative powers of every filmmaker.

Feroz Khan comes from theatre. He knows the voices of the actors must be heard in the last rows.

This is an important treatise of our times. It should not be missed by any Indian.