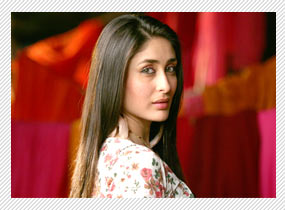 In the present generation, very few actresses enjoy the fan following and popularity that Kareena Kapoor enjoys. This year has been extra special for Kareena as she has finally settled into matrimony with her hubby dearest Saif Ali Khan. The gorgeous diva is now gearing up for the release of her biggie Talaash where she once again pairs up with one of her favourite co-stars Aamir Khan. Bollywood Hungama's Nikhil Ramsubramaniam caught up with Kareena and spoke about her Talaash experience, her admiration for Aamir, her thoughts on mixed feedback to her last release Heroine and of course what she feels about now being Kareena Kapoor Khan. You don't wanna miss reading this one...

Isn't it ironic that you've already done a film called Talaash- the Hunt Begins with Akshay Kumar early in your career and are now doing another film by the same name- Talaash?

Yaa it's quite a coincidence. I just hope this one does really well (smiles)

Coming to this Talaash, you are once again re-uniting with Aamir after the hugely successful 3 Idiots, how's been the experience this time around?

Well it's been a great experience. 3 Idiots has been an iconic film in my career. I am very lucky to be working with Aamir back to back in 2 films. I've been a huge fan of Aamir and he is a tremendous actor.

In 3 Idiots however Aamir was playing a happy-go-lucky character whereas here he is intensity personified. Must have been quite a drastic change seeing him perform diametrically opposite rolesâ€¦

Aamir is an amazing actor and he can transform so effortlessly into any character that he is portraying that it's incredible.

After Chameli, you seem to be playing a prostitute yet again in Talaashâ€¦tell us more about your character Rosy.

Rosy is a Mumbai based escort. She is like the sunshine of the film but at the same time very deep. I've tried to give a restrained yet sensitive performance. I am totally looking forward to how the audience reacts now.

You also have Rani Mukerji in the film with whom you've worked in the past in Mujhse Dosti Karoge and L.O.C. Do you guys share screen space in Talaash?

No, unfortunately Rani and I don't have a single scene together which is quite disappointing. I'm genuinely fond of Rani and whenever we bump into each other at any function or party, we always sit and chat for sometime at least.

How was it working with Reema Kagti?

This is the first time I am working with a woman director. I don't think there is a real difference between working with a male director or a female director. When you see Reema she comes across as a very strong person but actually Reema is extremely sensitive. She is very caring towards her actors. She is one of the most sensitive directors I've worked with till date.


You did a cameo in Don and Luck By Chance but Talaash is your first full fledged film with Excel Entertainment. How's been the experience?

I've known Farhan and Ritesh before they even turned producers since we had some common friends. We've all literally grown together. They have been making great films over the years and I am happy that they thought of me for this film.

In each of your films, your styling has always been a hallmark. Tell us what kind of styling has gone in this time around?

The way my character Rosy is dressed is exactly the way you see these escorts in Mumbai dress. So there is no Indian wear and I am only seen in Western wear this time around. My look has been styled by Manoshi Nath and Rushi Sharma who've done some fabulous work in films like Oye Lucky! Lucky Oye!

How was it shooting your dance number 'Muskaanein Jhoothi Hai'?

It was a great experience. It's a promotional track and doesn't feature in the film though. We had Mickey Contractor style the make up and hair. The song has a very 50's kind of Jazz feel to it and I love Jazz.

Personally do you like watching suspense flicks, which has been your favourite ones?

I watch a lot of Agatha Christie's stuff which is really amazing. I love the whodunits like 'Poirot'- the TV series featuring David Suchet as Hercule Poirot. I've watched all 80-90 episodes. Among our suspense films, I really like the old classics like Madhumati.

Your last release Heroine got mixed feedback, are you happy with the response to the flick?

I am happy with the fact that people have loved my performance in the film. At the end of the day I am an actor and my job is to perform and act well and if people praise my performance I am content.

Last few months have been eventful for you, has it finally sunk in that you are now Kareena Kapoor Khan?

Wellâ€¦for me if you are in love and if you are happy that's all that really matters. Love and happiness are the two most important things in a relationship.


Can't help but ask how has life changed post marriage?

Not reallyâ€¦we are obviously the same two people. Marriage is of course a public promise and that's what we wanted to do to cement this relationship. We wanted to celebrate the fact of being in love with our friends, family and closed ones and we are happy we could do that.

Your item song in Dabangg 2 called 'Fevicol' is already being talked about. What can we expect this time around after 'Halkat Jawaani'

It's my most massy song till date with full on pelvic thrusts etc. It's just what the masses want. Farah has done a spectacular job. I think it should be a super-hit.

Finally what are your forthcoming projects?

I am doing Prakash Jha's Satyagrah. In my decade long career, I've worked with a gamut of filmmakers but never got a chance to work with Mr. Jha before this. I am really honoured to work with him now. It's a difficult role but I am looking forward to the journey and challenge. I am also doing Punit Malhotra's next with Imran Khan. This is my second film with Imran after Ek Main Aur Ekk Tu but that was very modern and contemporaryâ€¦ this one is very desi. I will begin working on both these films simultaneously from January 2013.